January 03, 2012
“The novelties of one generation are only the resuscitated fashions of the generation before last.”
- George Bernard Shaw (another Irish guy genetically unqualifed to comment on fashion)

Rabobank, Saxobank, Green edge, Quick Step, Katusha are all going with the 'classic' look: solid, bold color blocks.   I'm wagering Radio Shack and Garmin will follow suit with slight tweaks to last year's kit.   The net effect is that it looks like we'll be better able to tell them all apart this year, eh?   All in all an evolution in the right direction...

Classic style?  Here's a photo that's an icon of original classic maillot style:  The Four Horseman of Notre Dame...des Cyclistes:  Bobet, Geminiani, Anquetil and Riviere.   I'm pretty sure this shot is from 1959.   The rat pack had nothing on these guys, believe me. 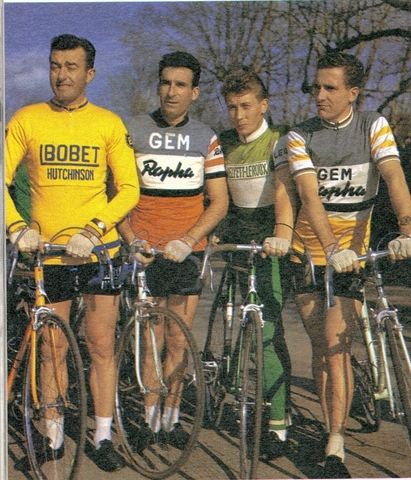 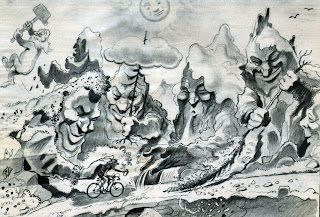 I think France ought to have it's own version of Mount Rushmore.   Only it should have these four faces hewn into the rock, overlooking some brutal climb, looking down on those struggling up the same climbs they conquered.

If the famous Tour de France cartoonist Pellos was still alive, I'd bet he'd get it.  And would approve, don't you think?.