Not your average Saturday cafe ride

September 17, 2012
'Wicked nice' ride with the flandria granfondistas Saturday.
We waited for the early morning rain to blow out, deftly escaped yard work duty, and headed for a rendezvous at 10am at Chez Nick in Wrentham.

Heading north boys.  Destination?   The closest thing that passes for a wielercafe in that locale.

On the way, Nick, Dr. Brad, Marc and I met up with two cafesupporters - Steve and Jason - just after we'd climbed a nice hilll in Dover that wound up past some horse farms and other real estate properties that, although way out of my price range, were very nice to look at.

Then it was a quick loop up and around Wellesley college campus, and 2 hours down, a break at one of our favorite cafe stops:  The Charles River Coffee House in South Natick.

It's a place we always hit on this ride.  And we're not alone.  For every time we arrive there, other cyclists are hanging at the sidewalk tables, enjoying a coffee and some of the great baked treats and swapping stories with our new mates.

Although the weather started out kinda crap on roads wet from morning showers and thick humidity, when we arrived at the Coffee House late morning, the sun was out, the air was crisper, and we enjoyed what was turning into the perfect end of summer ride.    Sometimes it's nice to do an cafe ride.   You don't always need to be riding tempo.

On the way back, our new friend Steve - kitted out on a very retro-cool Saronni red Colnago, and clad in period-appropriate Motorola jersey - guided us over some new low traffic back roads that wound us up toward Walpole, before we waved adios and headed back to Wrentham.   Our new companions were strong and smooth.   The six of us glided big ring back 53x17/16  back down the undulating Farm road (what I"m told is the throw-down crunch zone of the west-of-Boston Tuesday night world's ride)  but after that I lost track of where I was.   No matter.

The road and scenic quality of riding  in that part of Massachusetts is super, but is unfortunately matched by an aggrevated-and-in-a-hurry SUV driver quotient that's just as high.

We predictably got yelled at by a few for simply being on the road.   And buzzed at speeds way higher than necessary. It's an occupational hazard in and around Rt. 128 I'm afraid.   They must have been concerned that slowing to under 60 mph would cause them to miss  snagging that last on-sale bed ruffle at the local Pottery Barn. 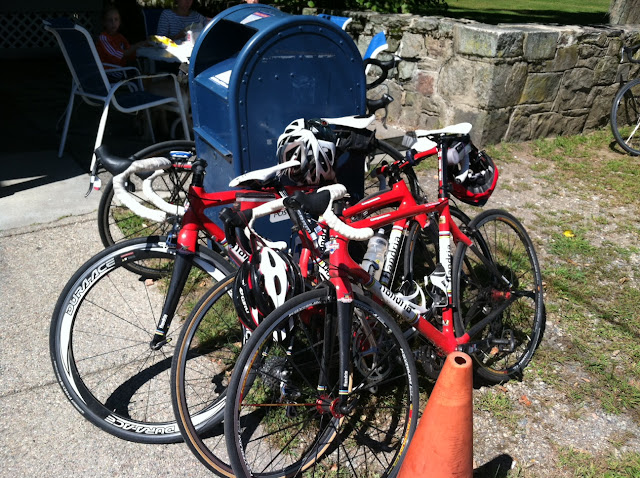 Into the final few miles, Nick twisted our arms (!) into taking a second lunch stop at the Terrace Cafe in Wrentham.   Not the toughest sale he's ever closed.

A bottle of Monte Antico rosso was opened, and an assortment of fresh sandwiches devoured shortly after.  Another hour wasting away in wielercafeville.  Decadent?  Maybe.  But you would have stopped too.   I'm pretty sure Eddy Merckx would have stopped  too if he were with us.

Got to confess... I'm starting to like this fondista thing.  But you can see how it would be real easy to morph into a dikke wielertoerist!

OK.  Back to Hard trainen tomorrow.