Retro: The '79 Worlds in Valkenburg - Raas is de baas. 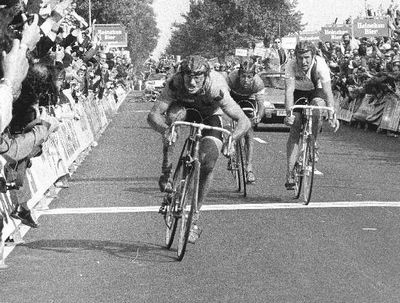 I remember the 1979 world's at the same Dutch venue.  It was - yikes- 33 years ago.  I was just 18 then, and remember reading about how the break came into the finish and an orange clad Zeeland puncher named Jan Raas, duking it out with Didi Thurau, switched hard right across the road in the sprint and took down the Italian hope Giovanni Battaglin.   Raas punched the air in triumph.  German wonderboy Thurau was 2nd.  France's Jean Rene Bernadeau 3rd.

I guess I remember that race with more than a hint of nostalgia  because that edition of VeloNews came the same week I had bought the exact same Raleigh team Reynolds 753 team issue frame that Raas rode to his worlds win.   Cost to me back then?   $380.    Loved that frame.

Fat chance an 18 year old kid this year will be able to buy the same frame that wins Sunday's worlds for the wage equivalent of ~2 weeks of after class work at a local bike shop!  I don't care what they say, the sport was infinitely more accessible then. 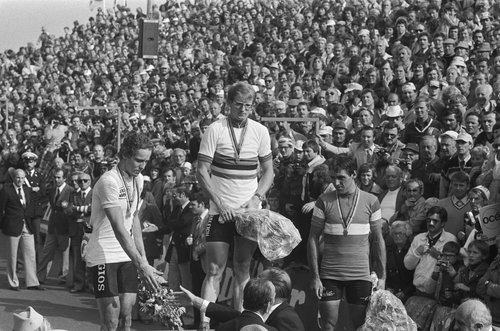 Battaglin was just coming off a Tour de France King of Mountains title that year, and was flying (after three years of being out with illness and bad form.)

As you can imagine, quite the opera ensued.   The Italian contingent litigated for over an hour to no avail.  The result stood.

Didi Thurau was on a big ride that day.  His forcing made the final selection with about 25 K to go, taking Dutch TI Raleigh teammates Raas, Henk Lubberding, Knut Knudsen of Denmark, neo-pro Danny Willems of Belgium, Battaglin and two French Renault teammates, Andre Chalmel and Jean Rene Bernadeau.
Missing out were favorites Saronni, Kelly, DeVlaeminck, Moser and Hinault.   But the French, Italians and Dutch all blocked once the break was away, and that was all she wrote. Raas got a bit of stick for holding onto his teammates going up the Cauberg early in the race.  "Everybody does it," he later said, "Just because I was Dutch and the race favourite, the camera picked me out."
Man of the match was Raas' Oranje teammate Lubberding.  He had done a lot of the riding hard on the front of the break, especially a big pull the last time up the Cauberg which kept it all together.
Just outside the final K, Knudsen touched Raas wheel and went down hard, taking out Willems too.

Then, Chalmel made his bid.  Raas played chicken.  He looked to Thurau to bring him back.   The wunderkind flinched first, and took off after the French hope who hit the wall in the final 300 meters.

Once they got him, both Thurau and Raas switched hard across the road, taking down Battaglin.
Chalmel almost stole it with that final K flyer, but there was no way Raas was losing in front of the home crowd.  And no way the officials were going to DQ him for a sprint violation.  Not in Valkenburg.  Not that day.  The Amstel guzzling hoards would probably have gone crazy.

If you look up 'hook' in the cycling dictionary, there ought to be a picture of Raas switching out Battaglin. Kinda miss Jan Raas.  Seems like some of his countrymen do too... literally. Here's a edition of the Zeeland TV cycling documentary series 'Met je Kop in the de Wind'.  The segment is titled 'where is Jan Raas?', as it documents a guy going around the townsfolk of s'Heerenhoek trying to find the champion.  Great profile, enjoy.
Jan Raas.  Raas is de Baas, en de rest is kaas..  Raas is the boss.  And the rest is cheese. I think they don't make true punchers like him anymore.  The guy looked like a few pints wouldn't do him any damage.  He could win a bunch sprint, or Paris Roubaix or Milan San Remo in a solo break. Who do you think he would compare to in today's peloton cafesupporters?