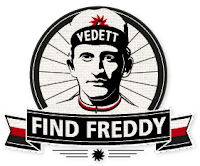 Cafe regulars know that flahute and I are longtime, loyal Freddy Maertens superfans.

Here's another reason why  (as if we needed it).

The concept? Have Freddy travel around Belgium in what looks like a cement mixer converted into a 'mobile bed and breakfast'.  Intercept unsuspecting passers by.  Talk them into a stay, with the former champion coming along as personal tourguide and party starter.

Here at the wielercafe, there's one thing we revere above all else, and that's a great champion who doesn't take himself too seriously.   Can you picture any other ex-World Professional Road Champion doing this?    Didn't think so.

Check out the video below.  I especially liked the part where Freddy reads excerpts from his new book 'A life in black in white' to two English tourists who don't have a clue who he is.

The campaign has several other videos of him taking the fun on the road.  Watch them here.  Great stuff.

Vedett is a brand of the Moortgat Duvel Brewery group:  The parent company of my favorite Ommegang Brewery in Cooperstown, NY.

Their Vedett Pilsener is not distributed this side of the Atlantic... 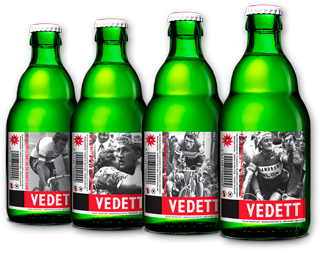 Too bad, would really like a set of those Freddy Maertens bottles. 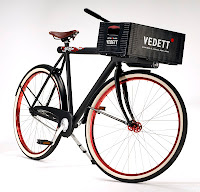 The promotional Vedett citybike isn't too shabby either.   Wonder how much bier you have to put away to earn one of those?