April 16, 2011
Here in my virtualcafe, I've often sounded off about how I like seeing a guy outside one of the big favorites snag a major classic out from under the nose of the highly paid favorites.

Maybe it comes from never having the talent to ever be a favorite myself way-back-when.   Or maybe it's that good 'ol American 'root-for-the-underdog' tendency.  Whatever.  I just know that I love unexpected exploits like the one Johan Van Summeren pulled off on the Carrefour de l'Arbre last Sunday.

Johan wasn't the only unheralded rider to make a mark on this year's Paris Roubaix.  Martin Tjallingi of Rabobank was also in the zone, always pushing the pace, opening up gaps on the pave seemingly at will, and in the end still having enough juice to earn a podium spot in a sprint.   Martin who?   That's who.

Often in Roubaix, we see the favorites give the escapers just a little too much leash.   This year's race was similar in many ways to three races in the eighties when 'unexpected' Belgian riders stole the show. 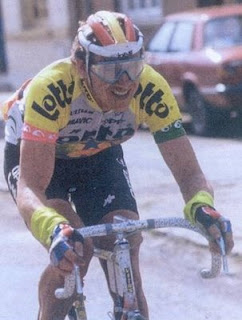 In 1988 it was current Radio Shack D.S. Dirk de Mol.   He was in a long breakaway with Switzerland's Thomas Wegmuller, a lanky rouleur his teammates somewhat nicknamed "Merckx" because of his obsession with long Merckxian style breakaways.    DeMol came into that race riding for the somewhat unheralded Belgian ADR team.   The team had come into Roubaix on a high:  Team leader Eddy Planckaert has just won the Ronde van Vlaanderen in a two up sprint over Phil Anderson.   De Mol was the man designated to go with the big early group of escapers.

Dirk DeMol didn't have a major pro victory reference to speak of.   He did, however, have a pretty darn good pave reference.   In 1979, he'd finished a close 2nd in the Amateur Paris-Roubaix, in a 2-up sprint behind ACBB's Stephen Roche.   The boy from Harelbeke had no fear of the stones of hell.

That day was a dry one, just like this year.  And like this year, the favorites gave the escape a little too much leash, for a little too long.  Favorites Kelly, Vanderaerden and Fignon marked each other out.   In the end, DeMol and Wegmuller survived the break to hold them all off, DeMol outsprinting his long break companion on a non-tradional road finish the race used from '86-'88.    Laurent Fignon was the best of the rest, much like was Cancellara this year.  It was as close as the dual Tour de France winner would come to winning Paris Roubaix. 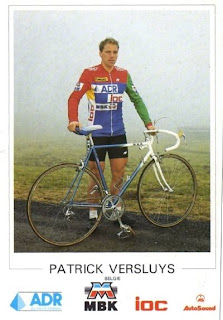 Ah, those were the good old days when potential Tour winners would try to win the Queen of Classics.

The year before, in 1987, a super tough cold wet race had seen a trio of Flemish fugitives almost pull the same trick off.   Unknown Patrick Versluys was away an alone at Hem with only 5 miles to go.  Hitachi teammates Rudy Dhaenens and Phillipe VandenBrand  brought him back, and it looked like a victory sprint of non-favorites.  But wonderboy Eric Vanderaerden bridged up with a massive solo similar to the one Cancellara tried this year, catching the escapers in the final k, and slaying them in de spurt.   Check it out. 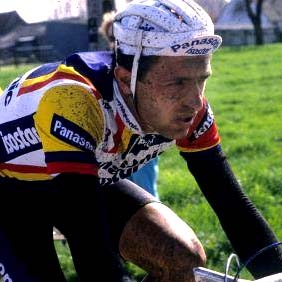 The year after DeMol's win in 1989, lighting struck the same place twice - it happened again.  A 6 man break had formed, comprised of four race favorites (Marc Madiot, Gilbert Duclos-Lassalle, Eddy Planckaert, recent Ronde winner Edwig van Hooydonck) and two outsider Belgians:  Panasonic's Jean-Marie Wampers, and Hitachi's Dirk de Wolf.    Again, the two outsiders unexpectedly dropped the favorites on the final sectors, and came into a 2 up sprint on the Roubaix velodrome, with Wampers winning a race 'a-la-Walko' as they say over there (a reference to unheralded Roger Walkowiak who won the 1956 Tour de France).  They say a win a-la-Walko is not a compliment, it's a lesser victory.  An asterisk.

Versluys, Wampers, DeMol, DeWolf, Dhaenens.   All Belgian hardmen, descended from the original Roubaix outsider Belge:  Pino Cerami, who won Roubaix at 38 in 1960, after a career as a domestique.

Statement of the obvious:  Cycling talent runs deep in de plaatland they call Belgium.   Deep enough to ensure that many of the starters who swing a leg over a bike in Compiegne, stand a pretty darn good chance of holding up a cobblestone 6 or 7 hours later.  The gap to the top podium step in Paris Roubaix is often closer than conventional wisdom and our hero-creating media would have us believe.  In Belgium, virtually every guy who claws his way to the point where he can actually get paid to race a bike, knows how to blast across cobbles.  Really fast.   And like the fearless gunfighters they are, on Roubaix Sunday, any of them will take a once in a lifetime chance if they get to.

Roubaix is the race when many of those 'nearly men' get to use their Pave skill to advantage, particularly when the top favorites play cat-and-mouse,  Like this year.

I'll always rejoice in days when the 'dark horses' are given a little too much rein.   In days when they get a deserved opportunity to share some of the spoils pro cycling doles out so disproportionately miserly.

Days when after a cold shower in front of a dozen microphones, exhausted but excited, they take a cobblestone back to a small supporterscafe in a Flemish village somewhere, and commence a spontaneous celebration those there will recount for generations.