April 20, 2011
Did a killer workout today.   What Chris Carmichael calls "peak and fade power intervals" - 2 min flat out, you start dying after one, legs burn, and you try to hold it.  Simple concept really.  Pure pain in a 120 second package.  Four of those, with only 1 min recovery between. It's one of the harder efforts you can do I think.   The last 30 seconds feel like many minutes.   Time seems to stand still.   Hang on....hang on....

Totally mental game.  In my advanced age, I'm becoming more and more intrigued by the challenge of seeing how long I can stay in the flat out hurt zone.   I'm 50, but still learning how to 'dose' efforts at the top end of my limit.   I'm working on learning, finally, that fine line between sustainable effort, and 'sprinting.'  My instinct when going that hard is often to 'sprint even harder' (which is possible, and my 'naturally' programmed response)... but flat out sprinting ensures a 'game-over' blow up proposition after one minute or so.    A 2-3 minute pursuitish efforts done 'properly' (e.g. 'to the limit') requires control and a little discipline - attributes less natural to me.

I'm learning that these 2 minute flat out efforts can still be darn near as fast as a sprint.... but can even be extended a fair amount more... for as long as you can take the pain. 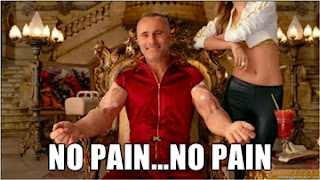 I'm entertained by the 'looks' of contempt this 50 year old dog gets from the general public while out on the open road doing power intervals.   Sometimes, it's contempt, accompanied by slow head shake, with a frown.  Or with eyes closed.   That's ok.   Last I heard, there's no age limit on hard training on the bike.

Wonder how those civilians will react when, God willing, they see me doing them at age 75.

Today I got to watch the current king of pain, the master of the extended sprint.   Phil Gilbert showed why he's the best rider in the world at the moment in winning the sprint up the Mur de Huy to claim the Waalse Pijl - Fleche Wallone.   He rode from the front, careful not to go too early looking at his rivals, turned up the heat at 350 meters, and let loose a big acceleration at 300 meters... still pretty early on that killer wall.  No one else was really close.   Gilbert has incredible uphill finishing ability.   He used the same move to win L'Eroica and Amstel Gold.   Stupendous.

Hey, what's two minutes?   Anyone can suffer to the limit for two minutes, right?   Well today, two minutes from the line, there were 40 or so pros in with a chance.   Two short - or long- minutes later, it was clear who was the strongest... the gaps were formidable.   The difference between first and thirty first?  The ability to really suffer for 2 minutes.    A defining requirement for a cyclist, I think.

It got me thinking about other killer uphill finshers.  Pros who could score in a sprint particularly if it was a watt contest up something steep.

The man who first comes to mind is that compact Italian Giuseppi "Beppe" Saronni.  Back in the 80's, Beppe won lots of Giro stages through sprints up through medieval, narrow streets.    And of course, he's best remembered for "Il fucillata di Goodwood" - the rifle shot up the finish hill in Goodwood UK where he hunted down Jock Boyer and literally flew away from Kelly, LeMond, Lejarreta and Zoetemelk to win the 1982 World Cycling Championship.    This week, Beppe seems to be engaged in a long uphill sprint of a different sort- this one away from the brouhaha surrounding the Lampre - Mantova doping investigation.

I prefer not to think about that, and instead remember Goodwood, and a 21 year young Giro winner in 1979  in a black and white SCIC jersey, sprinting out of the saddle with a raging face that looked an awful lot like Al Pacino as Michael Corleone in that scene when he stormed out the bathroom, gunning down Sallozzo and that 'crooked mick cop' who resembled half the men my family..(before the hole in the forehead of course!)

Another master of those finishes was Moreno Argentin.  Argentin won the Fleche Wallone in 90, 91 and 94.    Add to that list Cadel Evans, Laurent Jalabert,  Michele Bartoli,  Ale Valverde and Davide Rebellin.   All winners on the Mur de Huy, confirmed in other uphill finishes in the big Tours.

Gilbert is crowning a Belgian renaissance this classic season.  Ronde, Roubaix, Amstel and Fleche.   All  taken by Belgian pros this year.

Merckx said Gilbert can win on all terrains, and he's proving a worthy new Cannibal.  It's been a long time since Belgium has had a champion who was a factor in so many different types of races, on all different kinds of terrain.  And whether he wins or not, Gilbert has made the action in virtually every major single day race since the Worlds last year.

Phil is seeking that perfect 'fourth victory in a row' in Liege Bastogne Liege on Sunday.   The hype in the cafes of Remouchamps must be hitting fever pitch tonight.    L-B-L is the race of Phil's dreams... quite literally since he was a boy riding up LaRedoute.    And most of Belgium is likely willing him to win it with equal fervor across the liguistic divide.  I think a Phil solo win Sunday would be poetically perfect, the fulfillment of what's feeling like his destiny.    A few years ago, I remember he made a long, early break in L-B-L that came to grief on La Redoute.   I  was sorry to see him caught, and remember thinking at the time that maybe this kid didn't have the engine to win the really big ones.  I'm glad I was wrong.  And know that this year will be different.    It would be a fitting crown to a brilliant spring classics season for Gilbert.

Allez Phil.   It's enough to make me want to have a Duvel in celebration.   But I'm going to continue denying myself...for a few more days at least.   Quabbin road race on Saturday jongens.   A hilly race, and this doughboy doesn't need the extra calories, thank you very much.  I had a good week on the 'mass reduction' front, and I'm not spoiling that.

If I can manage to hang on and uncork a good uphill finish a-la Gilbert Saturday...OK, then maybe I'll have one.

If not, then I'll pass on the beer and do more power intervals.  Old bike racers never die.   They just get a little bit slower.