Not that much, right?   Sure, there's that old Liege-Bastogne-Liege in 1980 that Hinault won in a blizzard... but this year that seems ancient history.  In fact, watching the spring classics over the last few weeks take place under almost summer-like weather has been a tease for us stuck in a wet, raw New England April.    Yesterday I saw the recon pics from Liege-Bastogne-Liege: Pros mostly riding in shorts and short sleeves while training - it must have been pretty darn warm, usually they're well wrapped up in training.

The last days around here were 40's and 50's F, with flags straight out in a cold wind.   Shoe covers, long gloves, thermal cap, the whole nine-yards.   Windtunnel.  Cold.

But today, well it topped them all. The Quabbin Reservoir road race... 104km of up and down. Quabbin reservoir is one of the largest man-made public water supplies in the United States. Created in the 1930s in the great depression, it was made by flooding over a few towns. The race circumnavigates the reservoir clockwise, finishing on a 3 mile climb into the park on the southern end. It's a favorite road race here in New England - pretty good roads, lots of moderate climbs, all up and down.

On the way to the race around 7am, the cold rain started as predicted.   As we drove up to the start finish area near the observation tower in the park,  the ground was covered with...wait for it... snow!

I was pysched.  First race in Flandria Cafe kit, and we get a Monte Bondone 1956 simulation opportunity.    It was cold too...low 40's F, and the cold rain was bucketing down.  See your breath kind of cold.   Charly Gaul was up there somewhere, looking down, smiling.

At registration, I was starting to get revved up.  Ready for war!   Many of the skinny guys were already whining about the conditions, standing around, shivering.   Saying negative stuff.  Not me man!  I love these kinds of races.   I thought about how Charly Gaul used to whistle and sing when the weather was like that to psych out the rest.    Worse the better.   This was going to be fun.

Biggest decision was tights or no tights.   I thought, screw it, I'm a self-declared flahute, and hey I've got a reputation to protect.   So it was lots of BORN hot embrocation and enough grease to swim the channel, and going with bare legs.   Neoprene shoe covers multiple layers, plastic under the jersey.  Winter gloves and skull cap.    And stay in the warm car w/teammates Dr. Brad and the Goose, until the last minute.

There were ~116 or so 45+ guys registered, but there were only about 55 who took the start.    It was cold, the final 5 minute count-down was a shiver fest, a theme that continued on the controlled 5k downhill to the official start.   It was really freezing.  By the bottom of the hill the hands were soaked, numb, as was the body.   It was hard to brake.  Only about 3 hours to go.

The battle started soon enough.  The strong guys from CCB and Keltic starting drilling it on the hills going north along the west side of the reservoir.   After the big, definitive surge, there was a big selection... I was hanging at the back of that group, in the pain cave, doing everything to stay in contact, but suffering.

Suddenly, World TT masters champion, and ex-teammate Dima Buben comes riding by me laughing and pointing at my legs.  "What is your skin made of anyway??"   It was pretty funny, but I wasn't laughing, I was on the ropes.  Dima certaintly wasn't, he just rode up toward the front.  Morale blow.  Great rider though, Dima.  Good guy too. 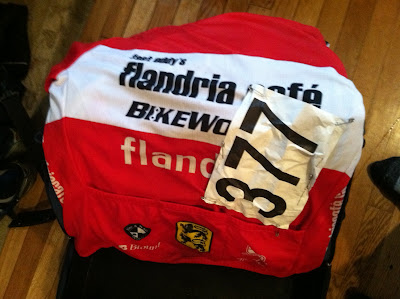 A few miles later, I had a bit of a collision trying to ride out of the saddle with numb hands and oxygen deprived senses.  For a sec, I was sure I was going down.   Saved it, but went off in the gutter.  Like a total Fred.  Now 50 meters back, which might as well have been 50 miles on that false flat.   Moment of truth again.  Sprint.   Oh-oh...I'm not coming back.  Try again.  Harder.  Nothing.   A rider catches me.   I can't hang with him.  Battery empty.  Dropped, doodmoe.

Never give up, right?  Chased hard with a group of 3 others.   Overdid it trying to come back.    Finally, they gapped me on a long climb to New Salem.  Bad legs.   Prayers to Saint Charly Gaul for intervention go unanswered.    No Angel of the Mountains today.  Nothing to do but grind on.

On the other side of the road, I passed a long, continuous line of guys who were riding back to the start, after saying 'no mas'.   Over my dead body.   I just kept going as hard as I could.    At one point, I passed a whole flock of guys off their bikes, likely from earlier races.   Some were getting into warm cars.   My hands were numb.  It was hard to shift, and I couldn't even squeeze a bottle to get a drink... in fact, I only drank about 1/4 bottle in 100k.   Mistake I know, but I didn't want to stop to drink.

As I was fumbling with the damn bottle and took the gloves off.   Couldn't get them back on, and the Cat 4 pack went by.  Nightmare.   Once the gloves were back, I chased hard.    Closed down to the following cars.  Leapfrogged up to the last one.   100 m to go.   Hit a climb, lost more.   For 10 miles or so I chased with that damn group in sight.   Never got them.

I did however, claw my way back to the trio that had dropped me earlier.   We rode the finale together.  I did too much work, in too big a gear, going too slow.  By the time I hit the final climb I was just in survival groveling mode.  But I finished.  32nd.  Over 30 minutes down on the winner.  Lousy result, disappointing after all the training.

My teammates Brad and Eric both finished too a few minutes later.  Brad's derailleur cable pulled out, and he needed to do the final climbs in his 12.   Eric wasn't happy, but he had little miles in this year, so I think his ride was super all considered.  So 100% of the Flandria Cafe team finished.  Not well, but finished.   I guess that counts for something on a day like this when only 35 survived to cross the line.

You can't wear this jersey and not finish, we figured.