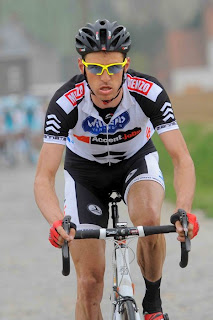 Sunday was also a day for an aging domestique.

Phenomenal ride by the unheralded Staf Scheirlinckx.   The Verandas Willems giant (he's 6' 4", 170) was in the big selection on the Muur, and rode to a fine 8th place, one place better than his old Lotto leader, Phil Gilbert.

At 32, and with only one victory in 12 years as a domestique, Scheirlinckx was given the freedom by director Lucien Van Impe to prepare and ride for himself at this year's Ronde.   When you're the end of your career, chances like that don't come often.   An Staf?  Well he seized the day as they say.

And for a moment, when he was there in the top six after the Bosberg, and the wielersupporter world outside Flanders said 'who's that guy?' it looked like we might be in for another vlaamse schoolboy dream come true, on cycling's holiest day.

"I was always convinced I could do it.  When you always work for a leader, you never get to know what you're really worth," he beamed as he told De Staandard.  "After the Bosberg when I was in the first six, I started to dream of the podium.  It's too bad I missed Paris-Nice and Tirreno Adriatico, with a stage race in my legs, I might have done a few places better."

Staf started with smaller teams Collstrop and Flanders, then came up to the big leagues with 5 years at Cofidis and two recently at Lotto.  I don't know whether he was dropped by Lotto, or if he chose to ride for himself in a smaller team in his final years.   I was left wondering:  What might the outcome have been if he and Phil had been riding together Sunday?

Old domestiques, who get their day to shine with the best.  I think it's one of the greatest things about cycling, it does the heart good.   Like the Terry Davenport character in Ralph Hurne's novel, the Yellow Jersey.

It's a pity Staf's Verandas Willems team wasn't invited to Paris Roubaix.   He finished 10th on the velodrome in 2006.    This year's Hell of the North will be a little poorer by not having the 'giant of Herzele' in it this year.   I would have loved to see him pull off a Pino Cerami.  Another Belgian career domestique, who won Roubaix in 1960, at age 38.

I'll have to transfer that sentiment to Georgie this Sunday.  George  Hincapie's 6th place in Meerbeke was a strong result, the form is there.  No doubt about that.  Can Hincapie finally win Roubaix?  Judging by the power of his BMC squad Sunday, I'd say it's more than possible.   Over half a century after Pino Cerami, Roubaix is ready for another retirement home candidate crowning a career by hoisting a cobble to the sky.