May 28, 2014
Transition day.  So they say.  On the agenda, two third category climbs, the tougher one first at Cloghoolia.  Cloghoolia.  Probably be a hoolie session alright.

It was not raining in Lisdoonvarna, but the skies were grey and it was coming surer than death and taxes.  Sure enough, on the descent out of town the rain came in sporadic waves.

The pace at the bottom of the first cat 3 climb gets aggressive. Alan's on the front again, wheel to wheel with a tall young early 20 something kid on a black Trek who looks a lot like Taylor Phinney.

Steep section now, into the small ring. Moment of truth.  A wall again. The surge and corresponding panic in the group is palpable. Trees still hide the terrain line.  How far to the top?  Audible breathing and chains.  Go around that big guy, he's going backwards through the bunch like he's falling down an elevator shaft. Maybe this wheel?  Nah, no good, he's a big tall fella who keeps surging and losing ground. The delayed response surging is making me motion sick, an oscillating sine wave of power variation torturous to my heart and legs.  Get over to the right side. Toward the toward the center of the road. Ah, much better here, nobody to screw with my steady rhythm.

Around a right turn bend, and the gradient steepens yet again.  Where's the top?  The front turns the screw.  I can't sustain it.  I have to sustain it.  Be smart now, don't blow.  Just hold this tempo.  The front group gaps me by about 20 yards or so.  Not again.  Not this time, NFW.  The grade eases now, thank Christ.  Grit the teeth, bigger gear, slower cadence.  This feels way better.  Power back to the front group.   I'm on Paul's wheel now.  Look around.  There's only about 15 of us left now. Alan and Taylor Phinney Dude are still on the front.  It's almost flat now.  There's the KOM.

Made the selection this time.  Legs are better today.  But I'm not spiking the football in the end zone though, it's a lot easier when a test comes in the 2nd hour instead of the 5th.  No self delusion.

We pull over for a regrouping. The rest aren't far behind. A cheery motorbike Garda who's guiding us along the route offers a tangible sweet reward - some Jaffa cakes.  We need these in the States, methinks. Shovel 'em in boy.

The rest of the day is less eventful, a two by two procession.  The weather is dry by the time we reach Charleville.  The run into town is fast.  Road furniture in the final K.  Could be carnage in the real Ras. The last 500 meters is uphill, hard left and still uphill all the way to the line.   A few guys sprint in.  I don't bother.  Tomorrow's the queen stage, save the legs. 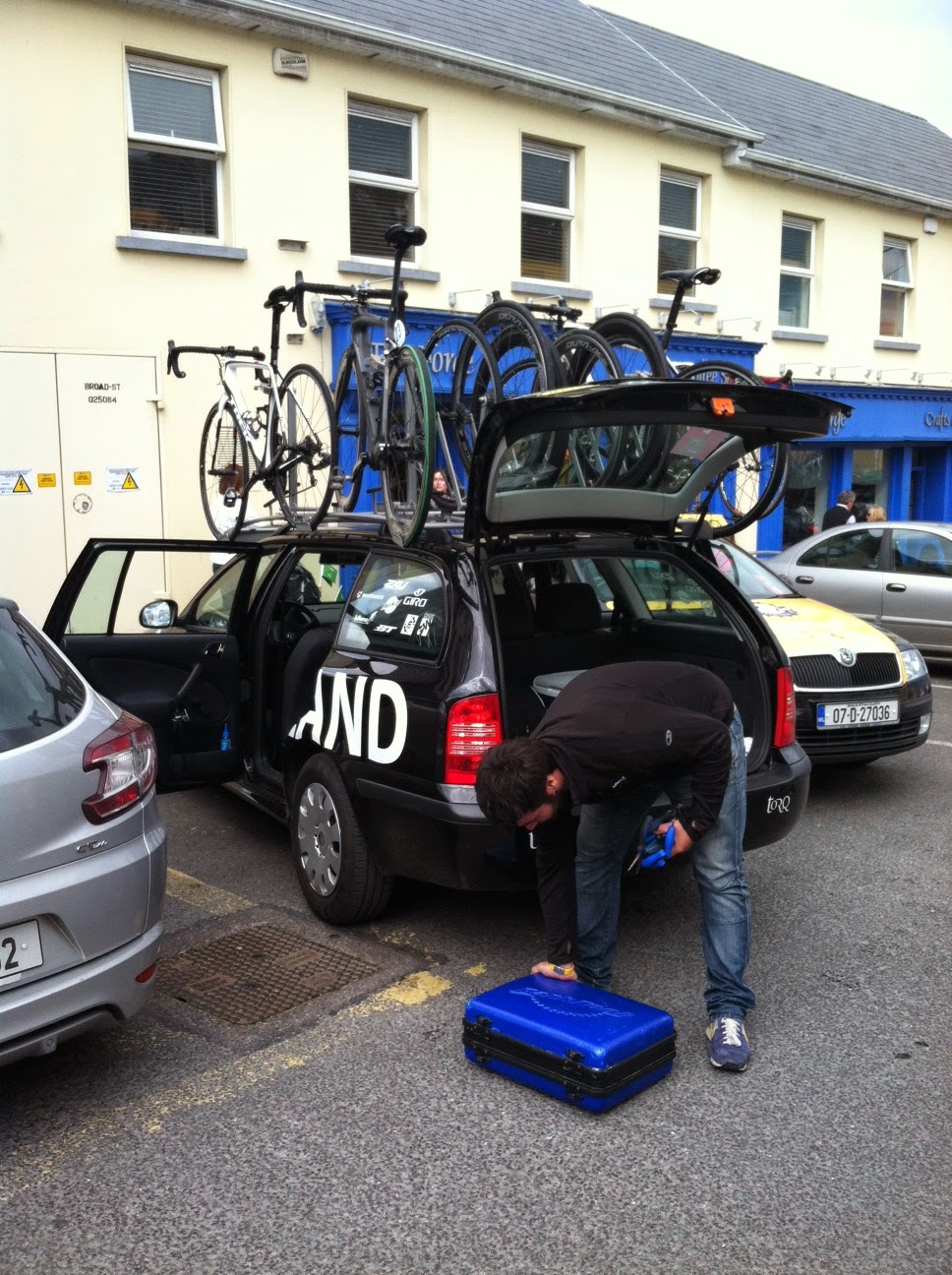 After we arrive, Paul and I quickly change on the bus and go down to watch the finish of the stage. A New Zealand rider, Patrick Bevin is in the leaders yellow jersey, after an impressive solo to Lisdoonvarna the day before.
Word last night was that he just rode away on the coast road and his gap kept getting bigger and bigger, winning by almost 2 minutes.  Now today, a break was up the road, and we'd heard that his team of New Zealand all blacks - track riders - had been on the front all day reducing the gap.

The 8 man break comes into town.  It's a Synergy Baku rider, Jan Sokol, who powers from the front to win the sprint.  The bunch is only 16 seconds back.  As they roll in, 3 New Zealand riders slowly roll in about a minute or two behind.

We walk down to the team cars now, on a little side mission: The director of the New Zealand team is Dave Mann, an ex-teammate of Paul's on Bill Sykes US-based IME professional team back in the 90's.  I'd met Dave at Frankie McCormack's retirement party in Plymouth, where we'd shared Paul's guest bedroom after a night on the beer, and where my Guinness-induced snoring (allegedly!) deprived the Kiwi of well earned sleep.  (I know, I know, I'll have to plead guilty).

Dave is smiling, happy to see Paul, but quite busy.  His phone buzzes. Brief pleasantries. Paul hands over a pair of Oakley's he brought and owed him.  A nice accessory to the 'man in black' look.  They exchange mobile numbers, promise to talk later and Dave jets off to get his man to the podium presentation.

That night in Charleville we got to bed early.  We're treated to some historical perspectives by Mícheál Ó Muircheartaigh, for over six decades, the TV voice of Gaelic Games on RTE.  For my American friends looking for a sports TV commentator analogy, just think of Ireland's Jim McKay.  Michael is also the father of Race the Ras organizer, Eamonn Ó Muircheartaigh.  And provided historical narratives on TG4's documentary about the history of the Ras.  As I love listening to historic anecdotes, his talk was a nice treat.

"I was down there talking to some of the guys, but after a while the talk was all 'Geek Watt Hill', so I figured I'd get some sleep".

I laugh and drift off to sleep praying for ample watts - and geek designation avoidance - in the Kerry mountains tomorrow.