Off to the Ras

Well, it's been quite a spring getting my old body ready for the 800 miles of Race the Ras.  Been piling on the miles. Lots of 3, 4 and even a few 5 hour rides, squeezing in time whenever possible.  It was a total challenge this year as March weather in New England was shite.  Even had a few 18 - 20 hour weeks on the bike in the past month.  Dr. Brad, Tony T. and Nick have been great company for an awfully lot of long base miles rides in crap weather.  Not pro level mileage, but good enough prep for this (he said hopefully).    I've been absent from all the usual preseason burnups with the club, and the early season races.  All sacrificed at the altar of the repeated long miles that hopefully have given me enough base to make it around Ireland in good form.   We'll know soon enough I suppose. 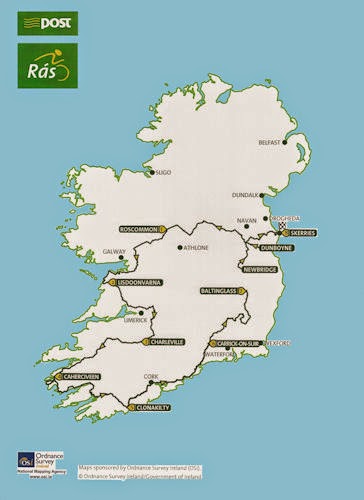 Paul Mac and I did a few 4 hour spins on my favorite Rik van Bastard loop in Northern RI.  Up and down, all day.  Paul can still out climb me when he really wants to.  We had few great duels up Tower Hill road. His preferred method is to gap his opponent on the steepest part, but then really punch it on the false flat and over the top.  The difference between a 2 time Ras champion, and a past-his-prime Ras wannabe I guess.  No worries, I held my own.  The real trick for both of us will be holding onto Alan in the Ring of Kerry, count on it!

No, I'm not quite a svelte climber, but happy that I'm a lot fitter than back in February.  I'm taking over  a brand spanking new Flandria Competition, this one with 11 speed Ultegra and Fulcrum tubeless wheels.  Been breaking it in over the past week. Funny, it's my first Shimano equipped road bike ever, since I started riding, back in 1975.

Must be a record of some kind, no?  Don't worry jongens, it is mechanical shifting not electric.  That's my hypocrite's old-school line in the sand.

Right now the Flandria is packed up in Tony T.'s sweet bike case (thanks T!) and in a few hours I'm shipping up to Boston to rendezvous with Paul and Alan McCormack at Logan, for our flight tonight to Dublin.  We're also flying over with another McCormack - Aaron.   Aaron's another Irish expat who now lives in Boston and is also doing the entire Ras.

I was disappointed to hear yesterday that Paul's good friend, partner in shenanigans, and fellow 2-time Ras winner Phillip Cassidy can't join us to ride Race the Ras this year. He's got shingles!  Bummer. Get well soon Cass, I'm really sorry I won't get a chance to meet and ride with you this year - I was really looking forward to that...

That's it for now.  I'm planning to do some blog updates from Ireland wifi permitting.  Should be fun, stay tuned.