May 19, 2014
On Saturday afternoon, Bikes assembled, we headed out for a spin in a bit.  Nothing strenuous, an hour and a half around to Howth head on the coast road where the Giro passed on the run in to Dublin on Stage 3 last week.

Only Howth head is a really steep climb with multiple ways up.  Got the ticker going a bit. Felt great.  Then it was up the coast to Malahide for a coffee stop.  Beautiful Saturday afternoon.  Coast road was packed with weekenders.  Despite the traffic, nobody ever beeped at us in annoyance.  They respect cyclists here.

Maybe it's the absence of pickup truck driving distracted and misinformed Americans.  Or maybe it's  the fact that there's still a Giro hangover in Dublin that has something to do with it.  Pink banners are up everywhere from Malahide to Parnell Square...

Sunday morning came soon enough, and with it the end of the sun.  it was pissing down.  After a full stick to your ribs Irish breakfast chez McCormack, it was time for thermal jackets, winter gloves, thermal and neoprene shoe covers.  Thank God I brought that stuff!  And the big old clear plastic Merckx era plastic rain cape.  I had the sinking feeling I was back at the tour of Gaspesie in 1981.  Cold. 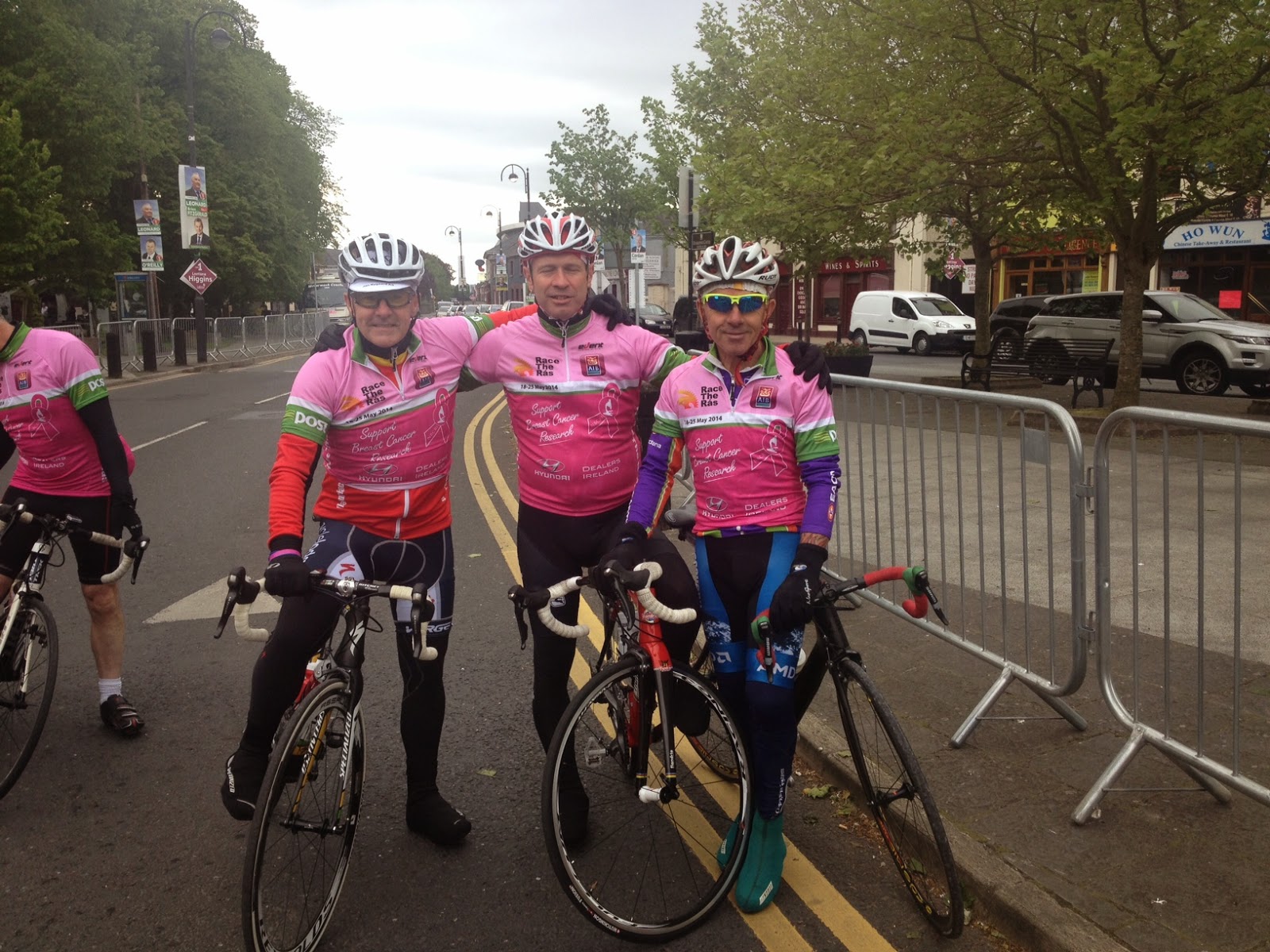 Ahead was 150k of mostly flat roads west to Roscommon.  Quickly we got rolling, all clad in pink Race the Ras jerseys.  The weather may have been gloomy but the company was as far from gloomy as you can get.  I quickly made new friends from Cork, Dublin and Donegal.  All facilitated by the 2 by 2 up and over ride format you almost never see in the states.  2 guys ride at the front - in 2 lines. After 5-10 min.outside guy pulls ahead and over.  Left hand line moves back, right hand line moves up.  You basically get a new partner to chat with every 5 minutes or so.  And in Ireland the chat is great, as you might imagine.

Pissed down all morning.  At 100k in we stopped at a GAA for tea and sandwiches.  Paul, Alan and I made straight for Brian's bus though to change clothes.  A life and health saver.  As Alan will tell you a pro always looks after the body first!

The Afternoon saw the pace quicken a bit, but we got to Roscommon without undue fatigue. Average heart rates were low, facilitated by a tailwind.  A nice run in.

After Dinner in Athlone, Brian took us on a short stroll (the very pro 'digestive walk') over the Shannon river past Athlone castle to Sean's Bar - the oldest pub in Ireland according to Guinness anyway.