May 30, 2014
Every once in a while, you meet someone who reminds you what really matters in cycling.

During the Ras, Micheal was that man.  He was a constant source of friendly, encouraging chatter throughout a hard week.  The colder the rain, the harder the route, the bigger the smile of sheer delight that crossed his face.

Every time I'd ride alongside him in the bunch, or in the queue for sandwiches.  He'd greet me by name with a clap on the back.  I don't think anyone in our group was having a better time. 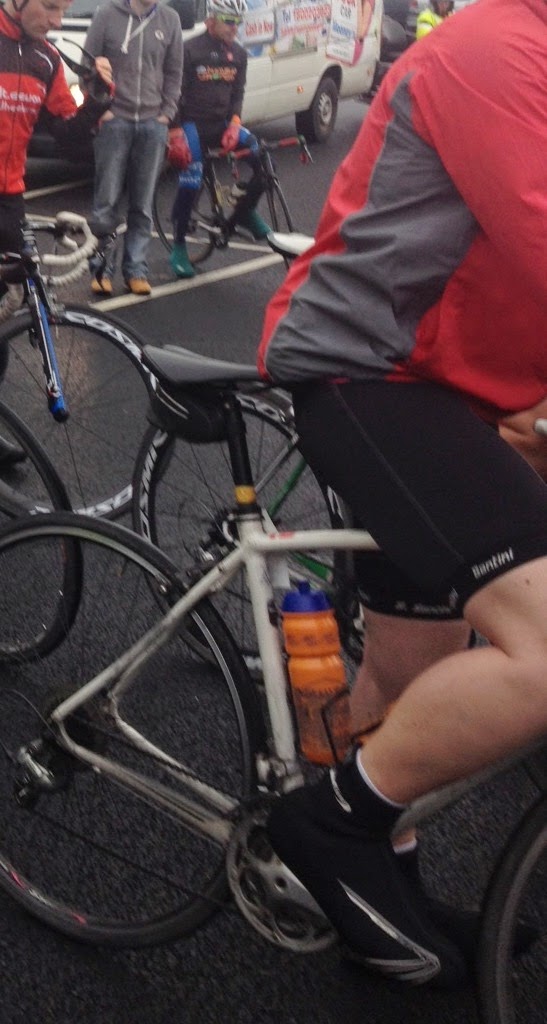 What I loved most about Mick was that he explified what really matters in cycling. His bike was not a superlight carbon fiber steed, but rather an average off-the-peg, white alu road machine with mid-range grouppo and ordinary clincher allow wheels.  He'd usually wear shorts, despite the cold.

His only concession to the rain was to cover his stocky torso with a large, red, and often billowing windbreaker that looked more Aldi than Assos.  On the front, in the wind, that red jacket would billow like a drag chute.  It made me tired just watching it, he must have been putting out an extra 30 watts because of that alone.

After about 4 days in the bunch Micheal's drive train was making all kinds of noise, chain skipping.  It didn't faze him one bit.  He'd just power away.  As sure as Eire is green, nobody could ever call Micheal a 'cog-head.'

They could however call him a bull. As a rider, Mike was a force of nature in the Joaquim Agostinho mould.  As solid as a concrete block, and about as aerodynamic.  But my God, what power.

When the roads got steepest, he'd demonstrate what really matters in cycling.  If you need to be a flyweight to be a grimpeur, nobody told Mick. Fearless on the climbs. His side-by-side ride setting tempo all the way up the Tunnel Road Caha Pass alongside two-time Ras winner Paul McCormack was a memorable display of strength, will and character.  I shudder to think how fast he'd go if he lost a little bulk.

And it wasn't just the long pedale climbs either.  My abiding memory of the week will be of Seskin Hill, in Carrick on Suir.  Some say it's the steepest climb in Ireland.  Only 1.5k or so, but it rears up in Zoncolan-esque ramps.

To be honest, I was just trying to get up it.  In the saddle, 34x25 power gone, no power, lights almost out.  On the curving steep ramps, Mick's massive calves come storming by me.  Punching. Stomping. Sheer power. I'm zig zagging. He's not.

At the the regroup at the top. Mick's face still displays that perpetual expression of sheer joy.  He claps me on the back.  How I wish we had more cyclists like Michael in the States.  Guys more concerned with enjoying the ride, and more interested in the physical challenge than with their gear, their watts and their caloric intake.  A living breathing antidote to 'Geek-Watt-Hill.'

At the end in Skerries, Micheal's whole tribe of kids is there to greet their Da home. Time for one more photo for the books.

Sláinte Micheal. Thanks for reminding me what matters in cycling.  Hope we get to do it again someday!