Canton cross - battle of the 'etceteras' 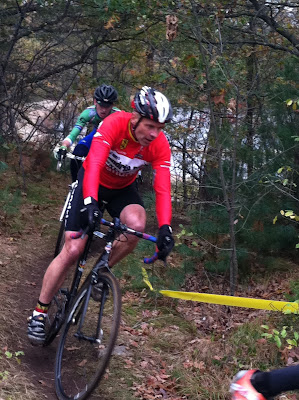 Canton Cross, the Massachusetts championships was a fun race today.  I was seeded at the back again (!) but after a poor start caused by an inability to click in (an omen), I felt pretty good for a change during lap one and was passing guys, moving up.   Unfortunately, that progress was thwarted by a clogged cleat problem that frustratingly cost me lots of places and time at key points in the race (like every remount), but no excuses, everybody has something to deal with in a cross race. Cross is a lot like life.  Obstacles and adversity try to stop your progress, but you just need to shut up and get on with it.  It was a good race, and I'm happy with my effort, if not my placing.

You gotta love cyclocross.  It's definitely the most fun you can have on a bike, no matter your age.  Pretty good training too... 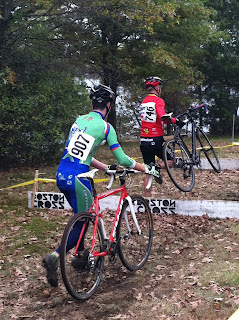 Canton is a long lap (~10 min).  It's mostly flat, and on well worn, fast grass.   A really enjoyable power course.

I kept the gearing low today, which seemed to help a lot, and helped snap up to speed faster coming out of the turns.

For much of the race, I was in 'a battle for Providence bragging rights' with my good pal Joe Savic from Arc en Ciel and Providence Bicycle.  Joe and I always seem to end up right next to each other in cross races.   We had a blast dicing on the fast course, laughing at times when one or the other trimmed the hedges going wide on a turn.

The most fun part of the course was the steep 'run-up', that this year could actually be a 'ride-up' if you came in fast and hit it just right.   Twice I was able to blast up it without dabbing, drawing whoops from the gallery gathered at the top....pretty funny actually, as I'm no Danny DeBie!   At least my 14 year old son thought it was cool.  (It's not often that happens...)

As we approached it the final time, Joe had dropped me by about 20 yards, but he had to dismount on the run up.  I came flying in, tried to power past on the left, and for a second, if you squinted and let your imagination run free, it was a coude-a-coude marginally reminicient of that of PouPou and Anquetil on the Puy de Dome in the '64 TdF.

I'm pretty sure we both were just as on the limit. At least I know I was.  Hence my oxygen deprived historical allusion-delusion.   Maybe a hallucination?

Anyway, I made it by him (ha! ha!!!) and only had to hold my narrow lead over the double barriers past the pits and sprint ~300 meters up the road to the line.  A perfect dismount, vault back on, and oh S*$&..this maldetto right cleat won't engage... again!!   It was my turn to fumble, as Joe and 2 others come by.  He took 25 meters, and despite my final desperate sprint rageuse, he stayed just ahead, and another anonymous battle of etceteras came to a close with some serious oxygen debt panting, followed by some smiles and laughs.  A great time was had by all.   Joe taking our 'battle of Providence' grude match.. 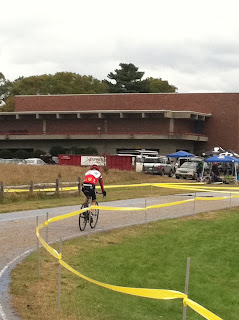 But wait...no that's not quite true, as my teammate Marc Tatar did an even better ride, finishing just up ahead of both of us!  We could see him, but couldn't close.  Marc's was just coming off a leg injury from Providence and a week off the bike after a biz trip to Europe. I was happy to see it didn't affect his ride today.  Pureblooded Flahute.

Speaking of flahute, after our race the weather turned nasty.  Cold rain, then sleet, and now it's snowing outside.  Seems like we've skipped past autumn and plunged right into winter here.

Think that tomorrow I'll get up, watch the Zonhoven Superprestige on the net, drink some coffee, hang with my family, and hopefully won't have to get out a snow shovels!    Enjoy your Zondag cafesupporters.   Hope at least where you are you can get out and ride...