Photo of the day: Sand, for PowerPlus

October 31, 2011
OK.   Yesterday a freak snowstorm - so it was a recovery spin on rollers, and a run.  Today up early  - lots of work to get done.  Did sneak out late this afternoon for 2.5 hours into increasing cold and dusk that in the last hour slid unintendedly into big ring tempo trying to beat the darkness back home.  Cold headwind coming back, but today was one of those rare days 'pedaling in the butter'.   Been feeling great since the cross race Saturday actually.   And one minute after pulling in today, the pulse was back down to 84.  Good sign.

I'm a little baffled, (but not unhappy) to be climbing hills faster in larger gears in 50 degree cold than I was back in August in 85 degree warmth.  I think maybe riding the cross bike once a week in the sand pit about a mile down the road accounts for some of it...

Sand rijden.  The cross tires sink in, you sit back and power through it.  Wicked hard, but wicked good for the power.  An hour of that, and riding on the road after seems easy.

Riding in the sand certainly worked wonders for my man Freddy Maertens and his pal Michel Pollentier.  Those two would go out and ride cross bikes through the dunes in Lombardsijde and Nieuwpoort all winter long.   And we're not talking a short sand section in a cross course... those two had set up a whole circuit in the dunes.   If the weather was too bad to be on the roads, they were in the dunes.   It produced victories in two world road championships, the Giro, the Vuelta, the Tour de Suisse, two Het Volk, Gand Wevelgem, a Tour of Flanders, 3 TdF Points jerseys, and a score of stage wins. 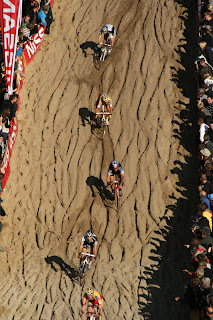 Speaking of sandpits, yesterday's Superprestige cross race at Zonhoven is on a circuit that's truly the 'sandman worlds'...it has a sandpit that's almost identical to the one just a mile up the road from here.  Local kids use it for Motorcross, and one crazy old guy uses it for cyclocross.

The downhill sand section in Zonhoven yesterday saw it's annual dose of wild endos.  The one by Tom Meeusen that also took down Rabobank's Bart Aernouts looked painful (flipping headfirst and landing right on Meeusen's bike and bars).  But Bart just got up and still rode home 8th.  Even better, he was all smiles and laughing about it with the commentator after the race, qualifying him as a new favorite of the cafesupporters here.

The winner Niels Albert looked like he had another gear on the steep run up, visibly faster than others who were pulling themselves up on the side barriers with their hands. And he was raging, powering through the long sand sections.  But just behind him, Sven Nys, true to the terminator he is, looked like he was coming back on him at the end, and finished strong.  Last week's dominant WorldCup winner Kevin Pauwels looked fried and stunned at the end as he came 3rd.

It must have been sweet revenge for Albert, the PowerPlus rider (a Belgian power tool company) was on the receiving end of a lot of criticism in the Flemish press the past few winless weeks.  Most notable was a salvo from Roger deVlaeminck who said 'he wasn't living fully dedicated to his sport.'   The fact that the diss came from Pope Roger Le Gitan himself made it about as close to excommunication from the holy church of latter day flahutes as you can get.

Anger likely simmering as hot as his embrocation, Belgian champ Albert demonstrated that revenge is best served cold.  And even better with a little bit of sand mixed in for traction.  I mean a LOT of Sand.  On one of the toughest cross courses out there, Albert powered away from the world's elite to an emphatic win.   PowerPlus?  You betcha flahutes.