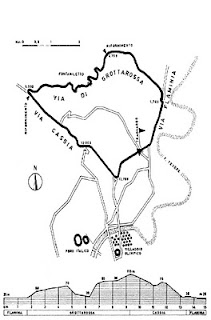 For you old school fans, here's a retro-cool video clip of an Olympic Games road race past.  And a requiem for a hardman.

We'll take a little nostalgia trip back to Rome, Aug. 30, 1960.  Hot day, wide open course on the Circuit Grottorossa in northern Rome (an almost perfect triangle comprising the beginning of the Via Flamania and the end of the Via Cassia), with nothing to keep the 42 degree C  (108 F!) Lazio sun from melting the riders.   Your Gelati didn't last long that day.

In weather as far from stereotypically 'Russian' as you can get, Viktor Kapitonov - who later became the 'direktor supremo' of Soviet cycling - got off and was joined in the break by the homeboy Italian, Livio Trape.

With one lap to go, Kapitonov sprinted over the line and raised his arm, only to be told, sorry Comrade, you've still got one more lap to go.

For most, that likely would have been a crushing, demoralizing blow, melting the will to win as surely as the sun was melting the tarmac.

Not for this Russian, who just put his head back down, worked for another lap with the Italian, and then coolly came around him in the final 50 meters to take Russia's first road cycling Gold medal back behind the Iron Curtain.

It was a victory that heralded in two decades of Soviet dominance in world 'amateur' (I use the word loosely) cycling, a dominance which Kapitonov would lead, and orchestrate.

Reaping the fruits of the ol' Darwinesque Russian method.  Gather up the best regional talent from the sports schools.   Throw them into a training camp from hell.  A week, maybe more of death rides in the mountains, and team time trials.  Oh, they loved team time trials.  The last men standing?   There's your team comrade.    Give each guy a plain red jersey, a red adidas tracksuit, a very likely used but still functional Colnago, and a plane ticket.

I was once told a story by an older rider who had raced in some Eastern bloc stage race in the late sixties or early seventies.   He said he was coming down from his room for his pre-stage breakfast at the hotel the teams were staying in, and he was walking past the open doorway of a room where the six Russian team riders - in red jerseys and shorts - were all lined up, and standing at attention.  Curiosity piqued at this unusual pre-race scene, he discreetly observed what followed.  In walks a Soviet General, in full military uniform, who barks at the riders, "I order you to win this race."

Shrug.  "They won the race."    Disobeying an order while in the Soviet military was not advised, or so I was told.

Not sure about that story, but am pretty sure that in our 'everybody's a winner-I'm ok-you're ok-we're all ok even if we're obese', increasingly soft American society, a little Kapitonov style hardness and reality slap would do us some good.   Great blog post here with more about Kapitonov.