The last chance saloon.   It was the phrase that replayed in my brain as I drove in the early morning, traffic-free Columbus day sun over the giant bridge to the beautiful island of Jamestown, a jewel in the middle of Narragansett bay.

How many pros have salvaged a zero season with a strong performance at the Tour of Lombardy for example?   Remember DeVlaeminck in 1976, winning a sprint over Bernard Thevenet.  Both were desperate for a win in a year that fell below their high expectations.   What's that old saying, 'it ain't over till it's over?' 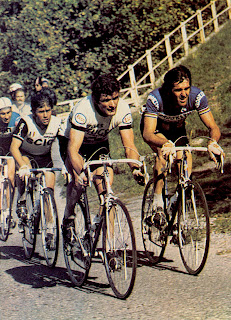 So a hot Indian Summer day and two laps around Jamestown with 75 or so 45+ Masters was a final chance to pull something, anything out of 2011.  Team Flandria Cafe had six of our flahutes in the race, our biggest squad of the season.  Kurt, Tom, the Goose, Spartacus Trojan and Marc all took the line - a red guard tired of being pack fill.   Marc T. was riding injured after a nasty crash the day before in the Providence cross.  But it takes more than a crash to slow that warrior down though.  He just iced his leg on the way to the race, and started things off by rocketing off the front trying to pull back the early break.

It set the tone.  In the 90 minutes that followed, we were all aggressive -- attacking, racing hard.  In the race, not following.   Four guys got away early, the ever-aggressive Randy Rusk making the race, and attempts to get him back were well covered by Arc en Ciel's team, mastefully orchestrated by Dave Kellogg.  Flandria missed the early break and the second one that Randy again initiated and finally stayed away.   We kept making attempts to bridge up, but every one was covered.  So into the finale, and a consolation race for 5th...

In de spurt, old instincts kicked in.   Feeling back in my element again, I managed to maneuver my way to the front up the hill in the final 2k, barged my way up, and hit the front with 200 meters to go.  I timed the sprint almost right, but lost two places by half a wheel in the last 20 meters, ending 4th in the bunch, for 8th overall.   OK, I know 8th in a small local race is nothing really to write home about, but after a year of getting shelled in most races, that was more like it - a positive end to a tough season largely filled with unrewarded graft.  The top 10 finish felt great, especially after the beating I'd taken in the previous two days' cyclocross races.    Never give up. 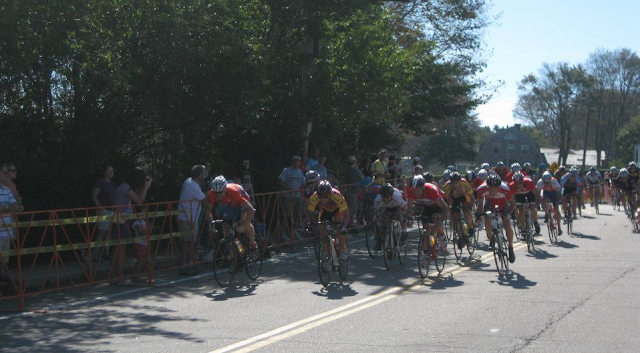 Once a sprinter, always a sprinter I guess.  I guess zebra's can't change their stripes that much, (not that it's going to stop my eternal quest to climb and T/T better).   It felt good to try to attack off the front and try to get away and not just save it all for the end.

One thing's for sure, I'm sticking with the old school training... But to rest, or not to rest?   It's funny how two days of flat-out racing were followed by a day when I could barely feel the pedals.  No pain.  I felt good the whole race, after feeling really wasted Sunday night with heavy legs.  Go figure.  Somebody has to explain this to me...

Road season over (almost wishing it wasn't), so now it's on to some nice long, unstructured fall rides, a few more cross races, and a long winter of continued work that will hopefully get me back to the next level.  I'm happy the Red Guard finished the season on a high note, and we're all looking for hopefully an even better year in 2012.

Thanks for reading.  Hope you're getting some great rides in this fall too.  Keep riding jongens.