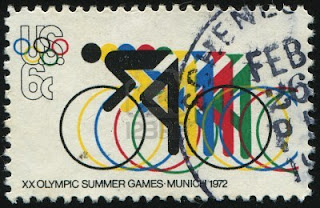 Fkrst let's set the stage:  The favorite for the road race was Flandria Cafe's eternal favorite, the man voted West Vlaanderens greatest rider of all time, Freddy Maertens.   Freddy had been the scourge of amateur racing the year before the Olympics, 1971.  That July, he'd won the Belgian national amateur road race in Nandrin with a solo attack on Mont Halleux.   (For those that said Freddy was 'just' a sprinter...watch the video below.   Much more than a 'field sprinter' he won plenty of races in breaks or solo)

Then, Freddy won the 'pre-olympic test' race on the Munich circuit in 1971 (like the one Cav just won in London a few weeks ago).  And he'd also led a strong Belgian contingent to Mendrisio, Switzerland for the World Amateur championships, getting second place on the line just behind France's Regis Ovion (check out a great old INA French TV interview/profile piece with the young Peugeot hope here).

Both Maertens and Ovion would remain amateur for '72 (Freddy because at only 20 was too young to turn pro in Belgium at that time anyway ..).

"Just hold the wheel of number 35" was the advice given to rivals of the flash from Lombardsijde, quoted in a newspaper headline before the big day.   A jinx?  Well, in the end Freddy was marked, out, and he didn't win a medal, finishing 13th.

The solo winner was another hardman from the lowlands, Holland's Hennie Kuiper.  Hennie soloed away with 40k to go and crossed the line smiling, waving his leather hairnet helmet in his hands.

Ah, the solo victory with no one else in the photo. Fortunately for us, there's some great photos of that day still around - check some out on Hennie's site here (he's posted an photo-history of Munich, and others from his incredible career).

Not blessed with a Maertens-esque sprint, for Kuiper the solo break was a necessity that became his signature specialty.   He'd do exactly the same three years later with the Pros, winning the '75 pro world's road race in Yvoir, beating a squabbling Belgian armada on their home turf.   In '77 he'd almost win the Tour de France with  solo attack to win the decisive stage on Alpe d'Huez, only denied by a raging Bernard Thevenet.   And later in his career, he would solo to wins Milan San Remo, De Ronde and Paris-Roubaix.

That 1972 day in Munich he'd dropped a field oozing with so many talented young riders:  Stars-to-be.  Many would graduate to make their mark on pro cycling over the next decade.

Kuiper, was just one part of a full team of Dutch masters that included the late Fedor den Hertog (nicknamed Ivan the terrible, the scourge of European Amateur racing), as well as Cees Priem and Piet Van Katwijk.  The latter two both became prominent members of Peter Post's Raleigh Armada.  Priem would also go on to direct the TVM pro team.

In addition to Regis Ovion, the French team boasted Raymond Martin.  Although he'd DNF that day in Munich, he'd have a distinguished pro career, taking the King of Mountains jersey in the 1980 Tour de France.

And a young Italian named Francesco Moser finished 8th.   And just in case you've been living under a rock or are too young to have seen him in action, the Trento-born champion they called Checco would become another campionissimo with victories in the World Road Championships, the Giro, a Paris-Roubaix hat trick.  And oh yeah, he even broke Merckx' hour record too.  Moser?  Picture a cross between Fabian Cancellara and Marcello Mastroianni.   He was the original Gladiator.

Luxembourg was represented by Erny Kirtchen and Lucien Didier.   I don't know if it's the Ardennes water, the tax free petrol and beer, but in the land of the lay-o-pard, cycling is an 'all-in-the family' business.  And it's not just the Schlecks.   Erny is the father of recent Tour yellow jersey Kim Kirchen.  And Lucien, who'd go on after Munuich to become pro a domestique for Bernard Hinault at Renault, had a son Laurent who's currently Contador's teammate at Saxo Bank.   And Lucien's stepfather had been 50's Tour stage winner, Bim Diedrich.

Other notable to-be-pros in that race included the Dane Jorgen Marcussen, who'd have a 13 year pro career and snag the bronze in the '78 pro worlds on the Nurburgring behind Kneet and Moser.

Just behind Kuiper, this Olympic race was marked by strong rides by English speakers.   Clyde Sefton of Australia took the Silver.  And New Zealand's Bruce Biddle crossed the line 4th just ahead of the England's two Phils:  Phil Bayton and Phil Edwards.    3rd place Jaime Huelamo of Spain was later DQ'd for failing a drug test for the respiratory stimulant coramine, (at the time it was a substance OK with the UCI, but banned by the IOC).  Ironically, they didn't give Biddle the bronze either as he hadn't been tested!   ("Cor blimy, what a croc!")

Americans John Howard and John Allis also finished respectably 61st and 63rd in the bunch, 2:32 back.

And what of the Irish you ask?  Well in those years marked by 'the troubles', two warring federations claimed the rights to select the Irish Olympic team send two different teams to Munich.    Seven members of the National Cycling Association (NCA) were arrested for disrupting the event. The ICU recognized separate national federations on either side of the border.  The NCA was an Irish Republican all-Ireland body not affiliated to the ICU. Three NCA members delayed the start by distributing leaflets, and the other four joined mid-race to ambush Irish competitor Noel Taggart, causing a minor pileup.  You can see the brouhaha at the beginning of the video above.  Good story from the Irish Independent of the whole episode here. 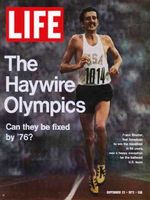 So the Munich '72 Olympics was a race filled with more than a little controversy, set in an Olympic Games overshadowed by an unspeakable tragedy.   Perhaps that's why it's a race that is largely forgotten about nowadays.

But looking back, with almost 40 years perspective, as Olympic games cycling road races go, Munich was historically important.   It was the launch pad for many future professional 'rockets'.   It was also, interestingly, a race dominated by riders from 'western' Europe, and non-continental English speaking nations.  Their total 'shutout' of the Eastern bloc in the road race wouldn't be repeated, as riders from behind the Iron Curtain would shortly exert iron dominance on 'Amateur' road championships throughout the rest of the '70's and 80's.