It's all about the motor. 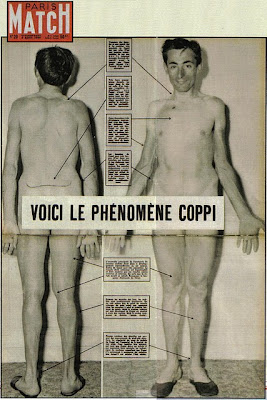 It's a funny sport, this cycling.

You can't just look at a guy and tell if he's any good.  It's not the size of the leg muscles, or the physique.  It's what's inside that counts.  The heart and lungs' collective ability to feed leg muscles with a rich supply of oxygen, continously.   It's all about the motor baby.  Good plumbing, good power.

Look at Coppi.  No no no... I mean really look at him.  Here's some photos  taken after he won the 1949 Tour de France by Paris Match.   Does he look like a great athlete?   More like a concentration camp victim - with a body marked, broken and crooked by crashes, malaria, and a childhood probably devoid of the necessary vitamins, minerals and those US government recommended daily servings of the four basic food groups.

None of this stopped Fausto from dropping everyone on the Izoard though.  In cycling, it's not what you can see, it's what you can't.  His blind masseur-guru Biagio Cavanna had it right when he once famously said his hands and ears could see and hear what his eyes could not.  How else could he have known at 19 that Coppi would be Coppi?  It he could see him, would it have changed his opinion?  Cavanna was evaluating the motor, not the body or the chassis. 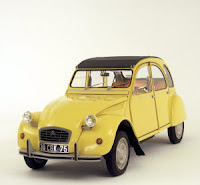 Our sport is full of slang for the motor.  The French call great champions like Hinault or Armstrong 'les gros moteurs'.  The big engines.  A guy without the right genetics?  He's a 2CV - that old Citroen with the tiny engine.

If the motor is good, you've got power to spare.  If your motor is small, poor, sick or untrained - you wheeze in air like a old car with a compression problem.   You press the accelerator, the motor sucks in more air, revs into the red, only there's no power to the rear wheels.

Case in point.  At yesterday's Canton, Cup Cyclocross just outside Boston, I was a vintage 1960 late-model Ford with compression and air intake issues.

Achilles had his heel, but for me the heaven sent handicap has always been Bronchitis.  Long story short, In the past two weeks, I'd been nailed by a bout, got a ZPAK, waited 7 days, resumed a week of training-- and still not kicking the thing, found myself in  race-eve no man's land... with a loose 'post-the-worst-of-it' recovery cough, still not breathing quite right, or fully healthy. 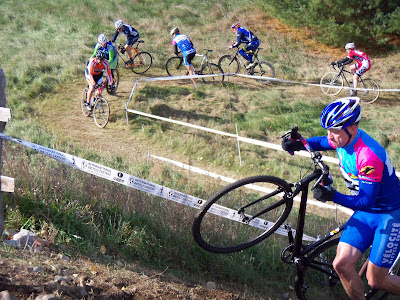 Shakespeare you wanker, that's never a question.   I've paid a non-refundable $30.  What would Briek do?  Of course I raced!

It was not the cleanest effort of my life.   It started with a bungled clip-in at the start, and some kamakaze bozo hooked my handlebars with his as he came by me.   We got sideways and for a nanosecond I thought it was goodnight Irene, but somehow I pulled out of it while the other guy bounced off me and into verge.   Fortunately the 'ol Kermesse  elbows still work fine.

But stalled about 25+ places back, the first lap was a fast grass crit on a long 11 min lap.   I held my own for a lap and a half, keeping my pulse right on zone 5 threshold redline where it stayed the entire race, but the acceleration and power wasn't there coming out of the turns and remounts.  A totally aerobic deficiency. Slowly, lap by lap, they started coming past.

At the finish, while guys were enthusiastically chatting and 'bench racing', I was bent over the bars in dry heaves, coughing.  The pitying looks this sideshow attracted suggested I'd better wise up and get healthy before any more cross.

(Hmmm...note to self:  Cyclocross, when properly executed, can be pretty tough on the lungs.)

On the other end of the spectrum this weekend was my good friend Keith Kelly - a guy who's demonstrated many times over the power of his world class motor. Keith rode two races yesterday, and was 30 sec a lap faster in the second!

Keith's athletic pedigree is phenomenal.  From just north of Dublin, he's one of a long line of Providence College Irish running talents, and the 2000 NCAA Cross Country Champion (interview here).

Injuries unfortunately curtailed his running career, but Keith is already starting to create a bit of a legend for himself on the bike around these parts.  He has started cyclocross this year, and is dong some great rides.   I'm quite sure if he wanted to, he could be one of the top guns in cyclocross.

Call me crazy, but I'm already fast forwarding to seeing an Irishman racing at the top of the Superprestige.  And unlike yours truly, Keith Kelly is one Irishman who I really believe could do just that.

Why?  Because it's all about the motor.