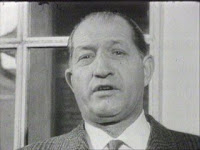 "Gli è tutto sbagliato, gli è tutto da rifare!"
(It's all broken, it all has to be done over!)
- Gino Bartali

Lots of big happenings in cycling-land in the past 48 hours, Cafesupporters.   Contador. Mosquera; Garcia. Sevilla.  A doping trifecta.

Flahute and I are fired up.   Sick of watching the same old doping soap opera acted out.  It's droll, and now it's getting boring.   And boring is bad.

Hey, I'm the paying customer here, I've got a right to sound off.   Why's that?  'Cause like you, I'm the dude who uses my own hard earned cash to buy the products this sport sells.  The mags.  The bikes and equipment.  The kit.  The Books and DVD's.   The event entries.  All of it.  You name it, I've bought it.

And, I'm the guy who rides not for financial gain or glory, but for pure unabashed love of the sport.  That gives me the right to sound off.

And after 35 years of silence, I've now officially had it with you knuckheads.  Not with cycling mind you, just with the morons who never learn, and the impact they're having on the greatest sport in the world.  And I've especially had it with those bureaucrats who have the power to change the rules, and the system.   You guys need some new blood, and new thinking.  And some balls.  Now.

The problem is, the whole system is stupid.  Or as Gino would say, 'tutto sbagliato'.

Let's take wide-eyed, well intentioned, Spanish teenage boys with big dreams and no money.  Put them in amateur cycling teams, give them super bikes and kit they can't afford.  Drive them out of pueblos to big race adventures all over the country.  Get them to forego their education and professional training options, tying their future to winning races, and toeing the line.  Make it crystal clear exactly what it takes to gain that slim razors edge of performance advantage that defines that difference between pro and schmoe.  Help them do it.  Indoctrinate them in omerta.  Reward them like Pavlov's dog for doing what it takes.  Help build them up to be gods with the public.

And then, the minute they get caught, turn on them. 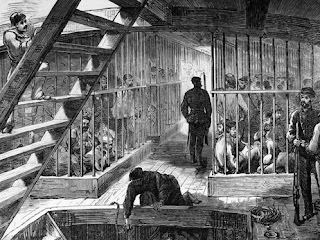 Short relevant sidebar:  I heard a great story on the radio a few weeks ago.  An economist was talking about how 'incentives' are the only real power to make big changes in culture and society.  The example he used was one of prison ships from England to Australia in the late 18th century.  At that time, if you were a paddy caught stealing a loaf of bread to feed the family, or throwing a rock at a redcoat after a night of poteen; you were put in gaol and sent on a prison ship to Australia.   And every time they'd pull up down under, a third of prisoners would dead on the voyage to sickness, scurvy, and beatings.

It eventually raised a scandal and public outcry in England.  They tried all kinds of ways to fix it.  Better food.  Putting doctors on board.  Paying the captain and crew more to take better care of prisoners.  None of it worked.  Despite these fixes, dozens would croak on the high seas.

Finally some economist got a bright idea.  He realized that they were paying the Captain based on the number of prisoners carried, counted by who'd get on board in Portsmouth.   The solution?  Simply change the incentive to only paying for the live prisoners who walked off the ship in Australia.  Virtually instantly, the survival rate jumped to 99%.

What's my point?  It's not these kids that are the problem.  It's the rewards system.  Don't blame them, blame their directors, all the way back up the food chain.  Those are the guys the system should be coming down on like a ton of bricks.


Want to fix this?   I could fix it in about four and half seconds.  Make me president of the UCI and I'll use the federation's leverage to shift the incentives in the system to a different leverage point.

Let's say a rider is caught with a positive.  Boom!  Suspend the team Directeur and the Doctor.  For years.  And the director of his amateur team?  Punish him too, especially that scumbag.  Three strikes, and he's out.  That'll get their attention.  Hit their wallets, take away their teams, their livelihoods.  Believe me, they'll make sure their 'prisoners' get to the finish line clean and healthy.  Incent them to produce and promote not just fastest riders.  But the fast riders with a strong sense of moral character.

I'd go a little bit easier on the kids.  But a 2 year suspension is not a punishment, it's a long vacation.  (Hell, there are days I wish somebody would suspend  me for two years from my job...)

Instead, I'd make the kid reform to get a racing license back:  Make him do a year of UCI-community service.   Kinda like probation.  No service, no license, sorry.

I'd have them  coach cycling with kids in places like Cameroon, Guatemala, Siberia or Burkina Faso.  Help them scrounge up shitbox bikes for a team.  Make these superstars fix flats, true wheels and rub legs in anonymity for awhile.   It could be part of the UCI's Mondialization program.  It would not only be a way to atone and give back - it would be the only way they'd ever get their racing license back.

No more two years of sitting around Bergamo, sulking to the girlfriend and Bicisport about how 'I got screwed', training all day, meeting with agents, and crafting a PR strategy for the grande rientrato after 2 years.  Yeah, like Ricco, Basso and Rasmussen.   We should make these kids earn the right to come back on a moral basis, not just a competitive basis.   We'll see how many would pass that test...

Fixing the system is not that complicated.   With the power to grant licenses and certify clubs and events , the UCI has the ability to shift the incentives.

It seems all it lacks is the political will.