October 14, 2010
Watching the Tour de France this year made me think a lot about the impact of 'radio and watt meter-controlled-racing'.  Of being a slave to the numbers, to  technology.   It may make for optimal athletic performances, but the digitally-controlled racing that results can make for a 'less-than-optimal' sporting spectacle.

It made me think about Bernard Hinault.

Somebody once said, "you shouldn't meet your heroes, you'll be disappointed,"  I beg to differ.

Back in 1989, I was fortunate to find myself working with LOOK as the marketing manager of their US distributor at the time.   Hinault, just a few years retired after a legendary career, was working for LOOK - a new cycling brand built on his sweat and Bernard Tapie's cash- in a promotional and consulting capacity.  I first met him in Venice at the LOOK international meeting.  Over three days in one of the world's great cities, I quickly discovered this was not the guy portrayed in the American press, but a friendly, down to earth and generous man.  A regular guy.  I liked him every bit as much as I respected him.

That year at the Interbike trade show in Anaheim CA, five of us arranged to meet in the lobby for a 6am run before a long work day at the show: Hinault, Denis Briscadieu, John Goldsmith and Jay Romasco..  I was a little out of shape, but needed some training and figured it would be fun.  A quick jog with a legend and some good friends, how hard can it be?

I should have remembered that BC (before cycling) Hinault was schoolboy cross country champion in Brittany.  Reality set in like a shock as we took off.   Suddenly, barely awake, we're flying along at what felt like a sub-6 min/mile pace on Orange County's concrete-sidewalk-jungle.  I remember running right behind le blaireau... faster and faster and faster...just hanging on, staring at his back, thinking, "so this is how Criquielion and Zoetemelk must feel".   Eventually, I run out of oxygen, and pop...BAM.  No mas.

But as soon as Hinault dropped the last guy, he starts walking, stretching, flexing his arms and torso, letting us all catch back up.  Smiling.  Then on his cue, we all start running again, and the same scenario was repeated.  Sprinting along, faster, faster.  A battle to the death, one death at a time...Bam, Bam.   Then walking. 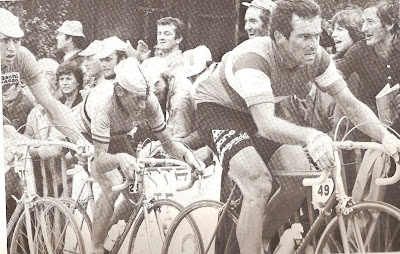 It was the 1980 World Championships in Sallanches, played out on the streets of Anaheim, California.   Hinault hitting it hard every time up the Cote Dommacy.  Dropping his adversaries, one at a time, till he was the last man standing.

Only this wasn't a world championship.  And that's the point, it didn't matter you see.  For it was a world champion, in his natural habitat, fighting.  As my pal Jay Romasco said later:  "Nobody was going to be able to say they dragged the badger in!"

It was less like a training run, and more like sparring rounds of boxing.  The man-to-man combat game.  No heart rate monitors.  No wattage numbers.  Just a good ol' schoolyard fight till someone cries uncle, and just one man is left standing.  King of the hill.  A game as old as mankind.  True sport at its essence.   It hurt, and it was fun.  30 minutes later, we're all warming down, stretching in the hotel parking lot, laughing and ready for a big 'ol American breakfast, the kind you won't find in Yffinac or Nevers.

That's what bike racing should always be. Especially the Tour de France.  It certainly always was back when Hinault was around.

I couldn't help thinking of that run while I watched Schleck and Contador basically ride together up the Tourmalet in July.  I contrast it with the battling spirit of Bernard Hinault, and wonder if in this modern age of radio controlled racing-by-numbers cycling hasn't lost a little old schoolyard-fight panache (oh wait, yeah, that's right I forgot, we don't let boys fight in schoolyards anymore).  Now I know I'm not fully appreciating how hard and fast the Alberto-Andy tandem was really going, or the reality that both might have been right on the limit that day.  Maybe it's the wrong example, but you get my point.

I'm not the only fan thinking this.  This month's Italian mag BiciSport features a few articles about how what seemed like that detente between Contador and Schleck was not pleasing to the fans.

What do you cafesupporters think?   Your comments are welcome...