Jamestown Classic: A race for a Rare Vos

October 13, 2010
Here in southern New England, we've got our own 'face of the falling leaves:'   The season ending Columbus Day Monday closer in Jamestown, Rhode Island.    Two laps around a beautiful island in the middle of Narragansett Bay.   Just under 40 miles. Perfect final fling for ending the season, hopefully on a upward note.   For many, a final chance to salvage something from a season that didn't live up to expectations.

OK, I know it's a bit of a stretch, but some of the ambiance did faintly resemble that I felt at the Giro di Lombardia I attended two years ago to watch the pro race and participate in the GranFondo.  A peloton snaking past residences overlooking magnificent waterfront views.   The indian summer weather, leaves not quite falling yet.  Knowing you're on borrowed time to wear shorts, but reluctance to let the reality of this enter your mind.  A sense of stealing one last great weekend, forestalling the inevitable challenges on the climatic and calorie control fronts. 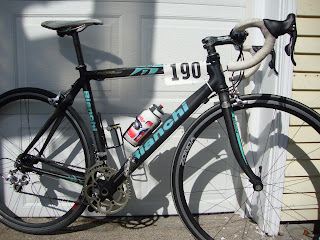 The relaxed atmosphere of the final road race of any season anywhere has a certain last day of school feel about it.   It's laid back.  In the race, there's less banging and barging, more courtesy.  Post-race conversations linger just that little bit longer.  Goodbyes are said till next season, knowing that when the next time the group reconvenes there'll be new bikes, jerseys, and way more adrenaline.

My wannabe analogy ends there though. The Jamestown course is really flat.  No Ghisallo or San Fermo here - just one short sharp drag with about a mile to go.   No matter, it didn't make it any less competitive.  Or demanding on the tactical savvy front.

I finally had a decent race physically.  Felt strong, and could actually race for the first time all season, not simply follow and survive.  I tried a test-attack very early.   Unfortunately the winning break of nine went just as we got caught.  The always super Dave Kellogg hit out hard on the rough pavement, followed by those who could.  I was cooked at the moment, and so missed what turned to be the move.  Recovered and chased hard for awhile with some others, but we weren't making a dent.   On the second lap, I was feeling good, and tried to breakaway a few times, but nothing doing.  Glad I tried though.

The finale was a blast.  I bridged up to a few late escapees on the final (only) hill, making contact with only the final downhill 800m to go.   It was too early though, unfortunately the front of the roaring bunch came by...and I ended up 21st.  No worries though.  A fun end to the season.

And by the way, Chris Carmichael's Time Crunched Training Program called it once again:  He says weekend 8 on this program is peak time to race.  I'd been following it to the letter again, and this was the end of week eight.   The guy's a genius.

Later that afternoon, despite not having ridden the smartest race of my life, I thought it would be ironically appropriate to uncork a Ommegang RareVos Belgian Ale to quietly celebrate the end of a comeback road season.  Rare Vos means Sly Fox in Flemish.   I clearly wasn't a rare vos in this race, but it didn't really matter.   I care more now about racing hard, a la flahute, at the front, and improving strength than in the final placings.   Well, ok, placings would be nice.

Hope you had a great ride this weekend too.