The Chamois of the Abruzzo

Tomorrow the Giro leaves the Strada Bianchi of Tuscany and heads to the first of several tough mountain finishes at Terminillo in the Abruzzese Appenines.

It's the first day for the mountain goats, a summit arrivo in the terra of a true mountain goat who passed away a few years ago - a rider little known to most English speaking cycling fans - Vito Taccone.

Taccone was a compact, powerful climber.   Nicknamed the Abruzzo Chamois, he was a Giro great of the early sixties, but an even greater character. 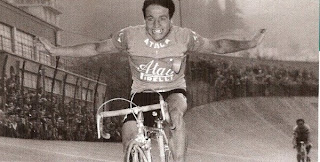 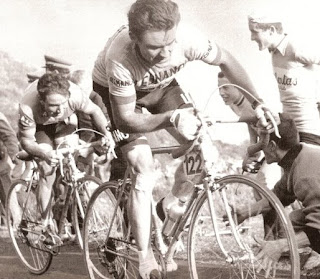 Born into poverty in Avezzano, Vito - using the proven Fausto Coppi template - leveraged a job as a bakers' delivery boy into a pro cycling career as a way up, and out.  The daily bike deliveries up and down Monte Salivano gave him the conditioning to climb like a goat, but it was his stubborn, belligerent character that made him a true force of nature on the bike.

Alas, this character was also his biggest weakness, for Vito tended not to find many friends in the bunch.  Impulsive, brash, and bellicose - Taccone drove the other riders crazy.    The stars of the day, mostly quieter and more reserved farm boys from the north of Italy -Balmamion, Adorni, Motta, Massignan, and DiFillipis - well, they found him uncouth.  They would rather see anyone else win.  Anyone but Taccone.
Despite it all, Vito won plenty anyway.  His pro debut was in 1961 and he won the Giro Di Lombardia.  It was the year organizer Torriani added the Muro di Sormano 'wall' that so many stars walked up.   (He's following Massignan up the Muro in the photo at left)
A natural battler, Taccone just took all the turmoil in stride.  In 1963, he won 4 consecutive Giro stages, and 5 in total.  You read it right - 4 in a row.  With the whole peloton against him.  The Tifosi loved him as much as the other riders despised him.
In the '64 Tour de France, he got into a famous punch up with the Spaniard Jesus Manzaneque after being accused of dangerous riding in the sprints and causing some crashes.   The resulting standoff and fisticuffs took place in the middle of the road, ending with the taller Spaniard ducking and covering while the shorter Taccone just wailed away at him like Rocky Marciano.   DQ'd, he refused to ever again ride in 'that French race.'

Taccone's life didn't get any less dramatic in retirement.   He was a TV cycling commentator for awhile and an entrepreneur who created a liquor company (Amaro Vito Taconne) and a sportwear concern (Vima).

Always living on the edge and working the angles, he found trouble with the law.  In 1982 he got a suspended sentence after a fistfight.  In 2006, things got a little more serious - Vito was arrested on charges of making and trading in clothing with counterfeit labels.   Ever with an eye for the dramatic, Taccone chained himself to the railings of the Palace of Juctice in Avezzano to protest his innocence, demanding the ear of the judge. 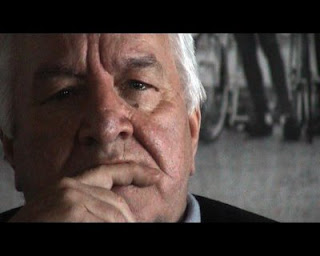 Like many Italian legal cases, it was ongoing.  It was also all too much.  At only 67, Taccone died at home of a heart attack in October 2007.  You don't need to be a rocket scientist to figure out how that happened, especially if you check out his on camera performance in the trailer for the video documentary made about his career here.   You don't have to be, or understand Italian to appreciate it.
Taccone was a real character, always with an opinion and a memorable quote.  A fervent supporter of another shady Abruzzo star Danilo DiLuca, Taccone didn't live to see his protege's fall from grace last year.   Do you think maybe the Killer should try chaining himself outside WADA headquarters?   Naah, it didn't work for poor Vito.

Check out more about Taccone here and here