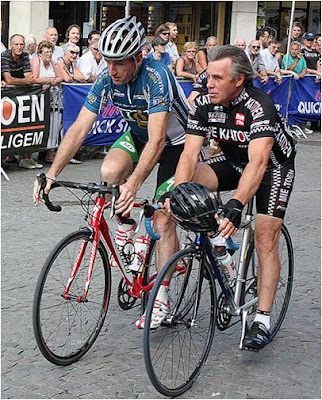 ...and contrary to popular opinion, they don't fade away either.

In fact, they never stop riding.

Here's some photos I found on the web of a ex-pro champion's invitational race in Belgium...(sorry I lost track of where to provide the credit) 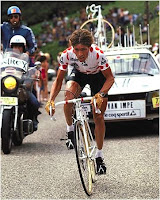 Flandria Cafe topfavorite, the King Sean Kelly with Lucien Van Impe.   Van Impe could out-grimp anyone.  Whenever I see a polka dot jersey... I think of compact Van Impe with an afro perm, dancing away with souplesse up some impossibly steep pass, leaving Thevenet and Merckx gasping and stomping.    Next time you're lugging up a hill in a too-big gear, think of Lucien's soupless, gear down and spin away.

Few know that climber Lucien once made an ill-fated April 1 attempt to take the hour record in Oostende... check out the video here for a good laugh :) 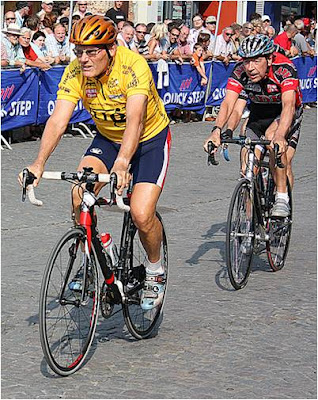 Today, Van Impe is sporting director of the Willems Veranda team.  In this photo he's wearing the jersey of the wieler cafe 'De Katoen' in Affligem, great place.

In yellow at left is Jan Janssen, First Dutch winner of the 1968 Tour de France.  He only took the jersey on the last day - winning by 38 seconds in a final day time trial a-la-Greg LeMond.

I met Janssen at the Brussels bike fair in 1993.   He was so surprised to find an American who knew he won the 1964 pro worlds in Sallanches that he offered me a cigarette... (eeerr..umm... no thanks Jan).   A real gentleman who has his own bicycle brand in Benelux and, he still makes the thing go pretty quick.

The guy on his wheel? None other than Herman Van Springel, the Flemish multi-time Bordeaux-Paris derny paced race champion, but perhaps better known as the man who's maillot jaune Janssen took on the final day of the '68 Tour.

Van Springel could do it all... and is still out there.