Fausto worship - the photo of the day 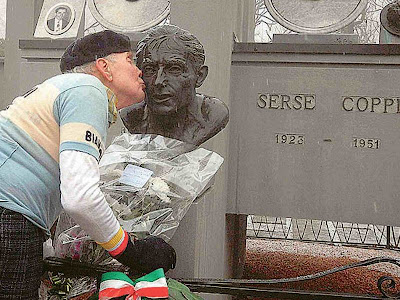 50 years after his death, the Giro paid tribute to Fausto Coppi today by routing today's stage to Novi Ligure that went through his home village of Castellania.

Never underestimate the Fausto-worship that lives on in the World War II generation of Italians.  He was symbolic of a nations rise from the humiliation and carnage of a lost war.   Following him on radio in the papers was a daily diversion at a time when most had little to celebrate - a passion that for some approaches religious zeal.  This is not an exaggeration.

Coppi's house and tomb is a place of constant pilgrimage.  Go there.  You can visit his old house that's been converted into a B&B.  There's also a Museum here.   (Killer restaurant Il Grande Airone too!)

Here's a translation and a link with some more photos of the visitor in today's photo - it's from a distinguished visit couple of years ago...

Castellania, the memory of Fausto Coppi
Fog and cold as that day, my heart squeezed by a vise of pain again like that day, January 2, 1960, when Fausto Coppi died. Valeriano Falsini this morning lay a bouquet of flowers on the grave of Campionissimo he, humble follower of the great champion, wrapped in the unforgettable sky blue jersey of Bianchi, along with Marina and Faustino Coppi and many friends, fans and enthusiasts who did not want to miss the simple ceremony that once again has decided to recall the great Fausto Anngelo Coppi.


Valeriano Falsini, 80, of Figline Valdarno (Firenze) is a friendly and outgoing person, who in his youth was gregarious and loyal teammate of Fausto Coppi.  Falsini came by car from Tuscany to Tortona, wore the shirt of Bianchi (the wool one) and climbed on a celeste "Bianchi" given to him by Coppi, covering in beautiful style that stretch of road that separated him from tomb and museum of his idol."
Mannori Antonio - tuttobiciweb.it