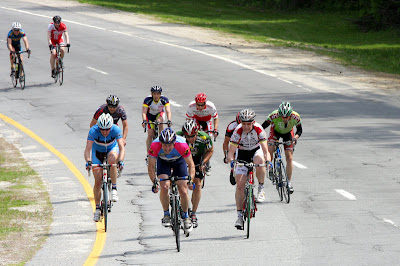 Well still-not-so-fast-Eddy took the consolation sprint of guys dropped in the finale of the 45+ race at Lake Sunapee this past Saturday.   At least this week I got through about 35 miles or so before getting dropped.

My own stupid, should-know-better overgearing on the climbs didn't help... the power left me suddenly on a short sharp acceleration.

No worries though, this time only 4:28 down... lots better than the 20+ min lost at Battenkill a month and a half ago.  Getting there - a few more races, watts on, and pounds off and I'll soon be sprinting with the leaders...

Lake Sunapee is a fun, classic New England race filled with good memories for me.    Back when I started racing it in 1977, it was held in late August and was the 'New England road racing championship'. 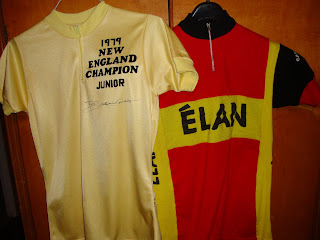 Yellow champions jerseys were awarded to the winners.   In '79 I came whisker close to getting one.  In the 68 mile Sr. 3/4 race, I finished second behind my good friend and club-mate Jimmy Lund.

With neural imprints of those old races still vivid, I'm pretty darn sure the pace was just as fast three decades later.   We were wailing up the hills, doing several in the big ring that I know used to be 'twiddler' small ring climbs back in the seventies.   The course profile definitely seemed less steep and 'easier' than I'd remembered it...the 45+ guys my be older, but they're not any slower - or it least it seems that way. 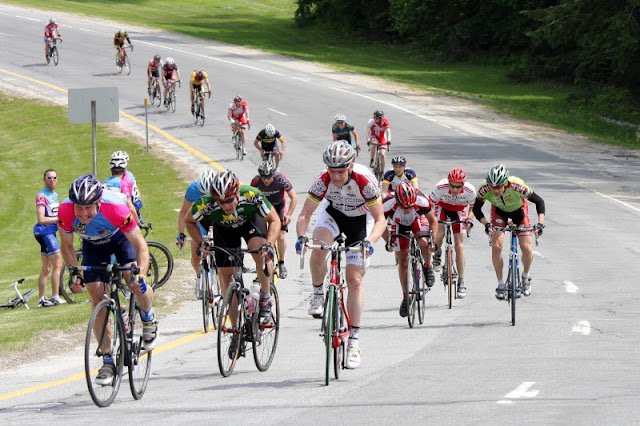 The organizers of the race did a super job handling a very challenging situation.  There was a big crash in the Cat 4 race entering the final turn just 1k to the finish.   I came by with my 'OTB' autobus group just a few seconds later and it looked pretty bad.  A few guys down in the middle of the road were not moving and getting attended to.   The marshalls stopped traffic and all the other races, and it took 40+ minutes or so to reopen the road, unfortuantely compromising the results of many of the races including the 1-2 men and women.  Story here.

You know how they say bike racers are sometimes an unruly, poorly behaved bunch?  Well, despite basically 'stopping' the race one mile from the end, and forcing the riders to wait 40+ minutes, the folks in those races were remarkably good humored and civilized according to my pal Brad who was held up in the 35+ cat 5 field.

I really felt for the organizer...because the race was, just as I'd remembered it, superbe in so many ways.  The weather great, the course excellent, the marshalling and registration super.  The rolling loop around the lake venue is great.   We need more real road races like this.

On behalf of the many who had a great time Saturday, I just want to use this blog to thank the promoter and his Lake Sunapee cycling club for putting on a super race.  I hope everyone in the crash wasn't hurt too badly.  Like many, I'm looking forward to next year.