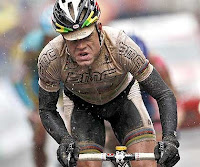 Saturday's Giro battle over the strada bianchi - the 'white' gravel roads in the back country of Tuscany just shattered the peloton, and provided a great day of racing.   Didn't see it?  Watch the stage recap here.   Primary protagonist and beneficiary on the day, the tough-as-Kasak-yak-hide Alexandre Vinokourov said after the race that those roads were ok for a one day race, but that they really shouldn't be included in the major tours.

What's that sound?   Oh, that's just Gino Bartali, rolling over in his grave. 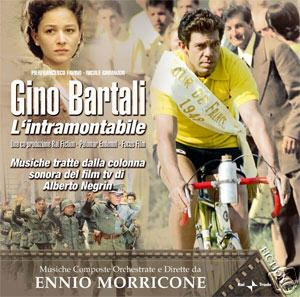 Ginataccio the iron man rode and raced those gravel roads for his daily bread throughout the 30's, 40's and 50's.   And you never heard him whining that they didn't belong in the Giro. 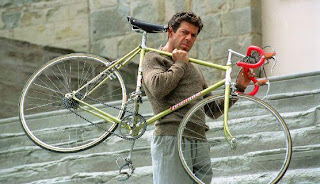 I'm assuming if you're reading this blog, you know who Bartali was, and also some about the significance of his exploits.  Deeply religious, Gino the Pious embodied toscano character and values.  Conservative Christian Democrat, friend of Popes.  Belligerent, crafty, articulate, and with an iron constitution.   I love the stories about how Gino would stay up into the early hours smoking, drinking and talking... and still win stages the next day.  Bartali never refused his Chianti, and yet still could drop anyone, virtually anywhere.   Alfredo Martini used to talk about training with Bartali,  who'd talk the whole time... while he'd end up struggling to hold Gino's 'normal' training tempo - having long since given up trying to particpate in the conversation! 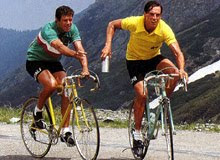 Bartali was more than a cycling champion.  He was a man who risked his neck during the second world war to save Jewish families from the Nazis.   If you're not up to speed on Gino's significance in both cycling and Italian culture, catch up on your remedial reading here, here and here.  And check out the Gino Bartali museum.

Better yet,  watch the well made 2006 RAI made for TV film about the life of Gino Bartali, Gino Bartali L'Intramontible -- the timeless Gino Bartali.

Go ahead, open your own bottle of Chianti and watch part one online here, and part two here.  It's OK, Gino would approve.

This pretty big budget dramatic Italian film features Italian actor Pierfrancesco Favino  in the role of Gino Bartali.  Despite the fact that this film has that 'ABC-made-for-TV-biography' flavor - over dramatizing and perhaps embellishing some of the key events in Bartali's life, the film is a artful and important summary of a great champion's life and times.

Don't worry that the film is in Italian...any true cycling fanatic will love it - it's a must see.  Read those links on Bartali and you'll follow the plot easily (if not all the dialogue).

The old racing scenes on the strada bianca are great, as is the authenticity of the replica bikes, cars and apparel of the superbly recreated pre/post World War II years.   Favino does a commendable job expressing Bartali's volatile and complex character, balancing the public and the private man.  His portrayal of Gino's complex relationship with his rival and 'nemesis' Fausto Coppi also rings true - as the two were close friends especially in Coppi's final year when Gino was to be his sporting director on the San Pelligrino team.

It's enough to make you want to go ride the l'Eroica and take on la strada bianca yourself.