A little boost from Dossard 51 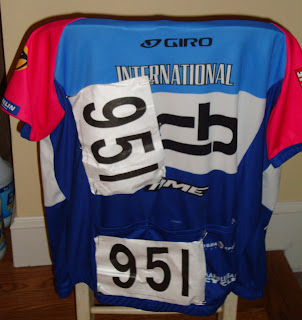 Today, I got the monkey off my back.  I finally finished a race in the bunch.  Let the pigeons loose!

The Blue Hills road race was 42 miles on a fast, but not very hard course.  The 7 mile circuit around a nice wooded reservation just outside Boston featured one big ring mile-long climb each lap.  It wasn't a very selective climb.   I felt better and better as the race went on, was able to mix it up in the action at the sharp end of the bunch during the finale--  even got off the front a bit on the last lap in a small group pulled away by World Masters Time Trial champion Dmitry Buben (a CCB club-mate).   Unfortunately, I couldn't uncork a great sprint at the end  - still lack the old explosiveness.  I ended up only 18th, but hey I'll take it...the front end of the bunch beats getting dropped.  Finally started to feel like the old days.

Maybe my race number was a lucky omen. It was 951.

I would have rather won the Mega Millions 250 million Friday night, but hey, when you're struggling to get your legs back, you'll seek and settle for any lucky sign that comes your way.

Dossard 51.    My old LOOK France business colleague and friend Denis Briscadieu created the very successful 'Culture Velo' cycling retailer's cooperative in France.  Denis was product manager for LOOK when we introduced the first commercially available Power Meter in the US - MAXone - back in 1989.   When Denis started Culture Velo he registered his new corporation with the name 'Societe Dossard 51'.    Cool name, eh?

Now I think I'll go have a Pastis... cinquante-une, naturellement.