Is this the best Giro in years? 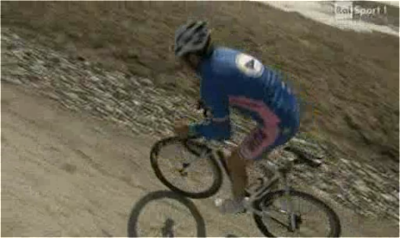 In contrast to the 'Bore-de-California', the Giro GC is getting tossed around every day like a good insalata.

Nibali and Basso just came back from their nap on the road to L'Aquila to take two key stages. But Vino, Evans, Sastre and Cunego are far from finished. And Toldo, Porte and Arroyo don't look like lying down without a fight either.

The stage to the natural arena that is the top of the Zoncolan yesterday saw Basso shatter the field, with guys wobbling up one at a time. Check out the video of the final k here, and see if you don't agree that the sight of riding up to a summit finish with 140 thousand screaming Italian fans doesn't beat a time trial in blase LA for drama.

Basso was on a great day, but for me the hero of the day (and the season so far) was Cadel Evans. After a few years of bad press, it's nice to see this guy finally getting the recognition he's earned. He's a real fighter, and with the consistency he's showing, I wouldn't be surprised  (and would be pleased) to see him win this Giro. 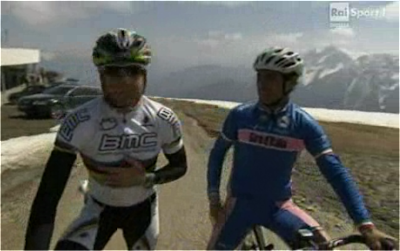 But given the way things have been going, the Plan de Corones TT tomorrow will probably change it up again... so stay tuned ragazzi. Wouldn't be surprised to see Sastre uncork one.  He usually comes on in week three, and is about due.

Check out RAI which did a great segment here on their T-Giro recap show yesterday with ex-pro Davide Cassani riding up the Plan de Corones climb, and hooking up with Evans on his own recon near the top. Ouch. Wicked steep. Looks like Mt. Washington, only steeper in sections. As Cassani says, near the top it flattens out a bit, and then you "turn and ride straight up into the sky"..or straight up to 'heaven'. Depends on your interpretation of 'cielo'.

Saturday's stage over Monte Grappa also saw a good battle on a really tough climb. The stage finished in Asolo - a small town I stayed in back in August 2001. A great two hour ride with an American friend who lived there on a borrowed Colnago C-40 (I think we saw about 4 cars on the whole ride)... followed by a super dinner in town. A really nice memory, with great company.  One of the only hill towns in the Veneto, Asolo looks out over Monte Grappa - a long climb with a big memorial at the top to the thousands of Italian 'Alpini' soldiers who were lost in the great World War I battle there.  Good article here.

That battle had an American connection. Bassano del Grappa, the city at the foot of the climb, is where a certain wounded volunteer ambulance corpsman named Ernest Hemingway recovered in hospital, fell in love with his nurse, and lived the experience that inspired 'A Farewell to Arms.'  You can still see the plaque outside the building where Ernesto's hospital was located. 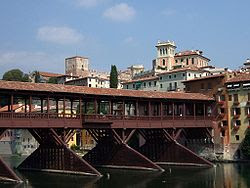 Bassano exudes Veneto style and industriousness. You're right smack in the heart of the Italian cycling industry, with Selle Italia, Northwave, Cicli Battaglin, Campagnolo and Selcof all just a few k's away. The velodrome in town hosted the 1985 World Track Championships. You can't sit beside a road for 10 minutes without seeing flocks and pairs of pro-looking riders coming by. All ages, all speeds. It's where the Veneto plain borders the foothills of the mountains.  And it's a cycling mecca.


Go there if you ever get the chance. Ride up Monte Grappa, and the spectacular climbing serpentine back road from Marostica up to Asiago. And when you're done with your ride, finish dinner with a Grappa on the wooden Ponte degli Alpini in the middle of old town Bassano.  Unlike the hi-test rocket fuel that passes for Grappa in most restaurants around here... the pure, crystal clear originale version in Bassano will go down as easy as water. Ma, Attenzione!  It'll be so smooth, your reaction will be delayed.