Gavia, schmavia, it's all about the descent... 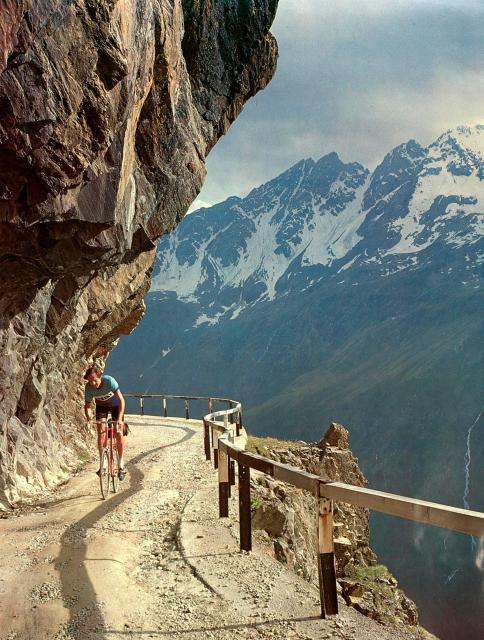 Today the Giro climbs the Passo Gavia as its final act in the mountains.  It'll be the Cima Coppi (highest summit) and the last climb of the race.  Last chance for Evans and Arroyo to take back time on Basso, who looked a little shaky coming down the Mortirolo today in the rain.  Nibali was waiting for him a lot, and he lost about 1 and a half minutes of his advance over to the dropped-but-desperately charging-back Arroyo, only to pull the elastic back out again on the finish climb to Aprica.

Today, they'll come up the Gavia from the Bormio side this time (I believe 'opposite' of the way the famous Andy Hampsten-blizzard epic of 1988).  No matter, still a killer climb.

When I heard they wever coming now this side, I thought of this photo, which I first saw on the cover of the Palo Alto Bicycle Sport mail order catalog back in '77.

I couldn't stop thinking about how insane a race down the Gavia would be.  I knew the dirt road has been repaved in recent years, and later learned that the descent won't actually be down this unpaved vertigo-inducing, gravel strewn goatpath that Jobst Brandt rode up years ago when he took this photo.   Fortunately, there's now a paved tunnel that has replaced the route along this ledge.

Based on his descending today, I think that if Basso had to chase down this road to save his maglia rosa, we would have ended up with a tragic plummet right out of Where Eagles Dare or the Eiger Sanction..  You know, the coyote-plunge from the Road Runner cartoon.

Davide Cassasi from RAI seemed to concur in his preview show last night on T-Giro (here):

"Attenzione!  This Gavia descent is the most technical, dangerous and difficult of the entire Giro.  The descent will be more important than the climb"

It ain't over till it's over.